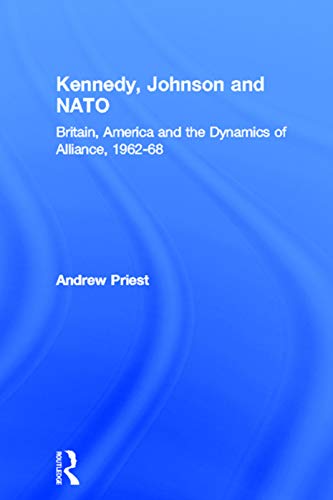 Kennedy, Johnson and NATO: Britain, America and the Dynamics of Alliance, 1962-68 by Andrew Priest (University of Wales, Aberystwyth, UK)

Kennedy, Johnson and the Defence of NATO is an incisive reassessment of Anglo-American defence relations, which form a crucial part of international security.

Andrew Priest closely examines this key relationship by focusing on the so-called Nassau agreement of December 1962. He clearly places Nassau in its context and shows how multi-level collaboration continued between the US and UK in NATO despite growing tensions over American involvement in Southeast Asia and Britain's global role. Firstly, he shows how agreements made between Presidents and Prime Ministers shape alliances in by encouraging interaction between politicians, government officials and military personnel at various levels of formality. Secondly, by focusing on the NATO area, he assesses US-UK attitudes to European and North Atlantic defence.

Traditionally, studies of US-UK relations at this time have tended to concentrate on developing difficulties between Presidents and Prime Ministers (particularly Harold Wilson and Lyndon B. Johnson), over global issues. This study demonstrates the 'dynamics of alliance' through a nuanced approach at high-political, official and 'working' levels, across different administrations in the US and UK. Although more recently some authors have successfully integrated such a 'multi-layered' approach particularly to studies of nuclear affairs, they have tended to treat the 1962 Nassau agreement as something of a denouement.

Andrew Priest is Lecturer in International Politics, University of Wales, Aberystwyth. He obtained his PhD in 2003 at the Department of American and Canadian Studies, University of Birmingham.

Introduction 1. Anglo-American Defence Relations in NATO 2. Skybolt, Polaris and Nassau 3. The Polaris Project and NATO 4. The MLF After Nassau 5. Washington and the Labour Party 6. The End of the MLF and Nuclear Sharing 7. Allies Under Strain 8. Putting NATO First? Conclusion

NLS9780415649490
9780415649490
0415649498
Kennedy, Johnson and NATO: Britain, America and the Dynamics of Alliance, 1962-68 by Andrew Priest (University of Wales, Aberystwyth, UK)
Andrew Priest (University of Wales, Aberystwyth, UK)
Contemporary Security Studies
New
Paperback
Taylor & Francis Ltd
2012-11-30
240
N/A
Book picture is for illustrative purposes only, actual binding, cover or edition may vary.
This is a new book - be the first to read this copy. With untouched pages and a perfect binding, your brand new copy is ready to be opened for the first time
Trustpilot