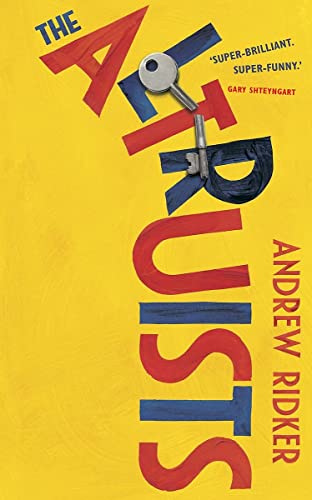 The Altruists
by Andrew Ridker

The Altruists by Andrew Ridker

'Reading Andrew Ridker's debut novel, you soon realise you're in the presence of a new talent.' The Times Arthur Alter is in trouble. A middling professor at a Midwestern college, he can't afford his mortgage, he's exasperated his new girlfriend, and his kids won't speak to him. And then there's the money - the small fortune his late wife Francine kept secret, which she bequeathed directly to his children. Those children are Ethan, an anxious recluse living off his mother's money on a choice plot of Brooklyn real estate; and Maggie, a would-be do-gooder trying to fashion herself a noble life of self-imposed poverty. On the verge of losing the family home, Arthur invites his children back to St. Louis under the guise of a reconciliation. But in doing so, he unwittingly unleashes a Pandora's Box of age-old resentments and long-buried memories. Spanning New York, Paris, Boston, St. Louis, and a small desert outpost in Zimbabwe, The Altruists is a razor-sharp, darkly funny family saga from a sparkling new talent.

"A whip-smart, wickedly funny and psychologically acute novel about the cost of doing good. The finale... hits the sweet spot between hilarity and pathos with particularly excruciating precision, but there's something to impress on every page." * Daily Mail *
"Reading Andrew Ridker's debut novel, you soon realise you're in the presence of a new talent... It's a novel about hypocrisy; about how complex power structures make hypocrites of us all, and about why it's important to accept that and love one another anyway... Ridker writes in crisp, sometimes side-splitting prose." * The Times *
"The Altruists, Andrew Ridker's intelligent, funny and remarkably assured first novel... [establishes him] as a big, promising talent... Ridker's ambitious blend of global perspective and intimate human comedy seems likely to evoke comparisons to the work of Jonathan Franzen and Nathan Hill." -- Stephen McCauley * New York Times Book Review *
"[A] smart novel with an impressive balance between satire and heart." * Sunday Times *
"This is a smart, knowing, tender first novel, full of immaculate comic timing and loquacious chutzpah." * Spectator *
"An incisive inquiry into the point at which self-interest ends and compassion begins." * New Yorker *
"With a sharp eye for the absurdities of contemporary American culture... The Altruists boasts numerous charms, ranging from worthy ethical issues treated with an effective wryness to its rare, fond celebration of steamy St. Louis. Its ending is well-earned, and so are its life lessons, adding up to an unusually promising debut." * NPR *
"This tragicomedy wittily explores old wounds, new grievances and hard-won wisdom." * Sunday Express *
"A widowed father and his adult children find their way after years of getting on one another's nerves. With prickly, strangely endearing characters and sharp writing, this novel is tender and hilarious." * Good Housekeeping *
"Tragedy begets comedy in Ridker's strikingly assured debut about a family undone by grief... Ridker spins delicate moral dilemmas in a novel that grows more complex and more uproarious by the page, culminating in an unforgettable climax." * Entertainment Weekly *

Andrew Ridker was born in 1991. His writing has appeared in The New York Times Magazine, The Paris Review Daily, Guernica, Boston Review, The Believer and St. Louis Magazine, and he is the editor of Privacy Policy: The Anthology of Surveillance Poetics. He is the recipient of an Iowa Arts Fellowship from the Iowa Writers' Workshop. The Altruists is his first novel.

GOR009776415
The Altruists by Andrew Ridker
Andrew Ridker
Used - Very Good
Hardback
Vintage Publishing
2019-03-07
320
1787330451
9781787330450
N/A
Book picture is for illustrative purposes only, actual binding, cover or edition may vary.
This is a used book - there is no escaping the fact it has been read by someone else and it will show signs of wear and previous use. Overall we expect it to be in very good condition, but if you are not entirely satisfied please get in touch with us.