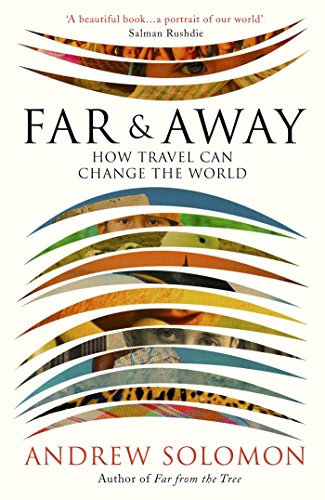 Far and Away
by Andrew Solomon

Used Price
$40.99
inc. GST
Free Shipping in Australia
In 1991 Andrew Solomon faced down tanks in Moscow with a band of Russian artists protesting the August coup. With his signature compassion, Solomon demonstrates both how history is altered by individuals, and how personal identities shift when governments change.
Very Good

Far and Away Summary

Far and Away: How Travel Can Change the World by Andrew Solomon

In 1991 Andrew Solomon faced down tanks in Moscow with a band of Russian artists protesting the August coup. We find him on the quest for a rare bird in Zambia in 1998, and in Greenland in 2001 researching widespread depression among the Inuit. In 2002 he was in Afghanistan for the fall of the Taliban. He was brought in for questioning in Qaddafi's Libya in 2006. In 2014 he travelled to Myanmar to meet ex-political prisoners as the country fitfully pushed towards freedom. Far and Away tells these and many other stories. With his signature compassion, Solomon demonstrates both how history is altered by individuals, and how personal identities shift when governments change. A journalist and essayist of remarkable perception and prescience, Solomon chronicles a life's travels to the nexus of hope, courage, and the uncertainty of lived experience and tracks seismic shifts - cultural, political and spiritual. He takes us on a magnificent journey into the heart of extraordinarily diverse experiences via intimate, deeply moving stories that reveal and revel in our common humanity.

Far and Away Reviews

"His voice and eye are always curious, never hurried; his sentences unspool elegantly, and are sharply alive to social cadences and cultural nuance... You can see him exploring and honing the listening habits that led to that book on almost every page here... Solomon lives with his subjects as long as he is able - searching out the dissident artists of China and the Inuit of Greenland, 80% of whom suffer from depression. In this way Solomon builds a picture of the world we have inhabited in the last 25 years, seen from its four corners." -- Tim Adams * Observer *
"Solomon unites human history around the world through his intimate, personal accounts." -- Will Coldwell * Guardian *
"He is an engaging guide - keen-eyed, self-reflective, shrewd, humane - and these articles have a pleasing passion." -- Caroline Moorehead * Guardian *
"Andrew Solomon is every bit as magnificent a traveler as he is a writer - in fact, it's difficult at times to determine which is the greater talent. Thankfully, the reader gets to experience both gifts throughout the pages of this deeply impressive and profoundly moving collection. Here is man whose curiosities are vast (politics, art, food, psychology, anthropology), and whose intellect is beautifully honed, but whose spirit is humble and whose heart is enormous. You will not only know the world better after having seen it through Solomon's eyes, you will also care about it more." -- Elizabeth Gilbert
"This is a beautiful book, inspired by love of `away' and uncertainty about `home,' a celebration of freedom which valuably warns that freedom must sometimes be learned. Much more than 'travel writing,' it's a portrait of our world, made by someone who has been there." -- Salman Rushdie
"From Cape Town to Bucharest, and Hangzhou to Tripoli, Andrew Solomon's Far and Away is positively Whitmanian in its openness to difficulty and its embodiment of wonder. I felt exposed and expanded. This book is an ecstatic provocation to understand ourselves not as citizens of nations but as citizens of the entire world, a world whose territories are glorious and troubled and desperately connected." -- Leslie Jamison
"Andrew Solomon's magisterial Far and Away collects a quarter-century of soul-shaking essays." * Vanity Fair *
"His writing is never less than deeply perceptive, and wonderfully humane." -- Caroline Sanderson * Bookseller *
"Greater than the sum of its parts. It sparkles with insights great and small on the countries and people that [Andrew Solomon] has had the privilege to meet over the last quarter century. Although his perceptions are keen, what he delivers best and with enchanting clarity are their truths, fears, regrets, and hopes. Readers will most certainly be inspired to book a flight, finishing this book en route to some faraway place." * Booklist *
"Solomon's writing captures the sweep of history and social upheaval through vivid, fine-grained reportage that's raptly attuned to individual experience." * Publishers Weekly *

Andrew Solomon holds a PhD in psychology from the University of Cambridge; is a professor of psychology at Columbia University and President of PEN American Center; and is a regular contributor to the Guardian, the New Yorker, and the New York Times. A lecturer and activist, he is the author of Far from the Tree: Parents, Children, and the Search for Identity, which won the Wellcome Trust Book Prize, the National Book Critics Circle Award and many other awards; and The Noonday Demon: An Atlas of Depression, which won the National Book Award, was a finalist for the Pulitzer Prize, and has been published in twenty-four languages. His TED talks have been viewed over 12 million times. A dual UK/US national, he lives in London and New York. www.andrewsolomon.com.

GOR007737232
Far and Away: How Travel Can Change the World by Andrew Solomon
Andrew Solomon
Used - Very Good
Hardback
Vintage Publishing
2016-09-29
592
178474011X
9781784740115
N/A
Book picture is for illustrative purposes only, actual binding, cover or edition may vary.
This is a used book - there is no escaping the fact it has been read by someone else and it will show signs of wear and previous use. Overall we expect it to be in very good condition, but if you are not entirely satisfied please get in touch with us.