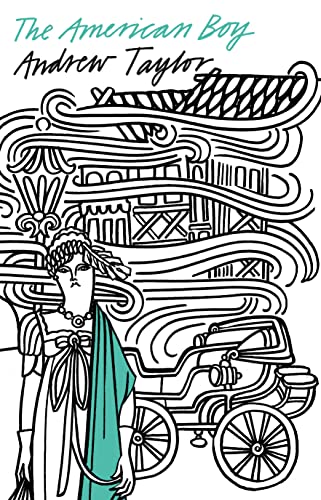 The American Boy
by Andrew Taylor

Interweaving real and fictional elements, `The American Boy' is a major literary historical crime novel in the tradition of `An Instance of the Fingerpost' and `Possession'. Repackaged as part of the Perennial fiction promotion.

The American Boy by Andrew Taylor

Interweaving real and fictional elements, `The American Boy' is a major literary historical crime novel in the tradition of `An Instance of the Fingerpost' and `Possession'. Repackaged as part of the Perennial fiction promotion.

England 1819: Thomas Shield, a new master at a school just outside London, is tutor to a young American boy and the boy's sensitive best friend, Charles Frant. Drawn to Frant's beautiful, unhappy mother, Thomas becomes caught up in her family's twisted intrigues.

Then a brutal crime is committed, with consequences that threaten to destroy Thomas and all that he has come to dearly value. Despite his efforts, Shield is caught up in a deadly tangle of sex, money, murder and lies - a tangle that grips him even tighter as he tries to escape from it. And what of the strange American child, at the heart of these macabre events - what is the secret of the boy named Edgar Allan Poe?

`Hugely entertaining. Its beguiling story and atmospheric evocation of Regency London and the winter landscapes of Gloucestershire cry out for a wingback chair by a blazing fire.' Observer

'In the end, the myriad mysteries of "The American Boy" are all neatly accounted for, as one would expect from a thriller writer such as Taylor. But he has transcended any limitations of genre in this novel, for it is a wonderful book, richly composed and beautifully written, an enthralling read from start to finish.' The Times

'Creates an atmosphere close to Sarah Waters' "Fingersmith" in the convincing depiction of a sadistic underworld. Taylor's deeply absorbing and beautifully written book is a fitting tribute to the founding father of crime fiction.' Independent

'A most artful and delightful book, that will both amuse and chill, and it will have you desperate to search out a quiet corner to continue your acquaintance with it.' Daily Telegraph

'It is as if Taylor has used the great master of the bizarre as both starting and finishing point, but in between created a period piece with its own unique voice. The result should satisfy those drawn to the fictions of the 19th century, or Poe, or indeed to crime-writing at its most creative.' Spectator

Andrew Taylor is the award-winning author of a number of crime novels, including the Dougal series, the Lydmouth books and the Roth Trilogy, which was adapted into the acclaimed ITV drama `Fallen Angel'. `The American Boy' was a 2005 Richard & Judy Book Club choice.

He has won many awards, including the CWA John Creasey Award, an Edgar Scroll from the Mystery Writers of America and the CWA Ellis Peters Historical Daggers (the only author to win it twice). He and his wife live with their children in the Forest of Dean.

GOR002324079
The American Boy by Andrew Taylor
Andrew Taylor
Used - Very Good
Paperback
HarperCollins Publishers
2008-02-04
512
0007266731
9780007266739
N/A
Book picture is for illustrative purposes only, actual binding, cover or edition may vary.
This is a used book - there is no escaping the fact it has been read by someone else and it will show signs of wear and previous use. Overall we expect it to be in very good condition, but if you are not entirely satisfied please get in touch with us.