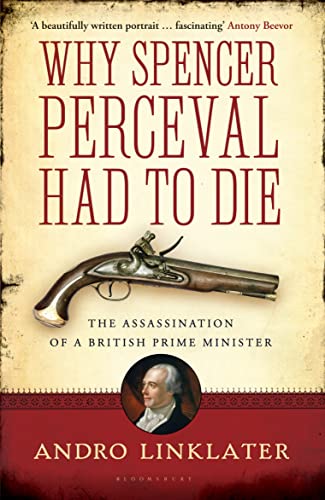 Why Spencer Perceval Had to Die by Andro Linklater

On the two hundredth anniversary of the assassination of Spencer Perceval - the only British Prime Minister ever to have suffered that fate - this is the riveting untold story of the murder, the murderer and the repercussions of his act

Why Spencer Perceval Had to Die by Andro Linklater

On 11 May 1812 Spencer Perceval, the British Prime Minister, was fatally shot at close range in the lobby of the House of Commons. In the confused aftermath, his assailant, John Bellingham, made no effort to escape. A week later, before his motives could be examined, he was tried and hanged. Here, for the first time, the historian Andro Linklater looks past the conventional image of Bellingham as a 'deranged businessman' and portrays him as an individual, driven by personal anxieties and by the raw emotions that convulsed his home town of Liverpool. But as the evidence accumulates, a wider, darker picture emerges - John Bellignham was not alone in hating the prime minister. Two hundred years later, Andro Linklater examines the ecidence and brilliantly deconstructs the assassination of Spencer Perceval - the only British Prime Minister ever to have suffered that fate - to offer a fresh perspective on Britain and the Western world at a critical moment in history.
Andro Linklater's Why Spencer Perceval Had to Die is a beautifully written portrait of an overlooked prime minister and a fascinating account of his assassination during the Napoleonic Wars * Antony Beevor *
Enjoyable if ultimately eccentric survey ... He is entertaining on the temper of the times * Andrew Holgate, The Sunday Times Ireland *
Written with novelistic pace and the literary devices of a potboiler, the book is really two in one. The first, an overview of Perceval's neglected career, is sure-footed and worthy. The second, a breathlessly conspiratorial account of his death, is compulsively readable and wildly implausible * Wall Street Journal *
Deftly sniffing out political machinations and murderous conspiracies, Linklater has written a richly atmospheric, engrossing and authoritative account of an assassination that, Linklater notes, shook the world 200 years ago as forcefully as JFK's assassination did in our time * Publishers Weekly *
Andro Linklater makes good use of the excellent copy that this story affords * Literary Review *
The facts revealed by letters, diaries and court records are fascinating enough. Linklater's book has more value than a historical whodunit. It helps us to understand the turbulent times and series of events that the author believes, inevitably, led to Perceval's assassination. It gives us a genuine understanding of the two key figures: the prime minister and his murderer * Sunday Express *
Wonderful and fascinating ... It deserves to be a classic, plunged into the American reader's consciousness as firmly as the iron spikes or the witness trees at the edges of the maps it so splendidly describes * Simon Winchester, Boston Globe on Measuring America *
Andro Linklater has the talent not just to let us know how things work, but to make us want to know. He encloses his specifics inside generalities inside universals, as if they were nested Russian dolls ... a magical mystery tour that leaves the reader exhilarated by unexpected connections ... Throughout the book, Mr Linklater has allowed his humans wonderfully to subvert his measurings * New York Times *
In Measuring America, Linklater traces with unusual elegance and a keen wit the epic story of measuring our nation, charting the process by which, with each length of the surveyor's chain, new states were literally bought into being ... remarkable * Los Angeles Times *
Linklater very skilfully reconstructs the careers of both Bellingham and Perceval towards their fatal convergence. In doing so, he uncovers a host of ambiguities, vested interests, national and international intrigues and unexplained facts ... Linklater reconstructs this forgotten moment of history with both wit and care. It is a gloriously murky, brilliantly crepuscular book * Stuart Kelly Scotland on Sunday *
Andro Linklater is the author of Measuring America: How An Untamed Wilderness Shaped the United States and Fulfilled the Promise of Democracy, The Fabric of America: How Our Borders and Boundaries Shaped the Country and Forged Our National Identity, and An Artist in Treason: The Extraordinary Double Life of General James Wilkinson. He lives in England.
GOR006112201
9781408831717
1408831716
Why Spencer Perceval Had to Die by Andro Linklater
Andro Linklater
Used - Very Good
Paperback
Bloomsbury Publishing PLC
2013-05-09
304
N/A
Book picture is for illustrative purposes only, actual binding, cover or edition may vary.
This is a used book - there is no escaping the fact it has been read by someone else and it will show signs of wear and previous use. Overall we expect it to be in very good condition, but if you are not entirely satisfied please get in touch with us
Trustpilot