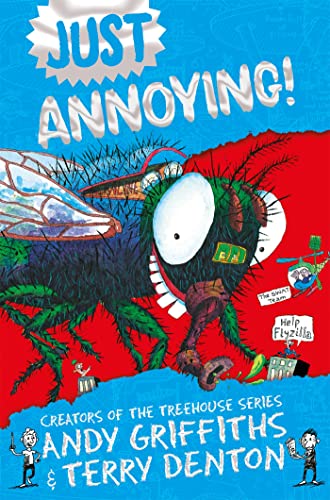 Used Price
$16.49
inc. GST
Free Shipping in Australia
The perfect book for any practical joker - Just Annoying is the second book in the hilarious Just series by Andy Griffiths and Terry Denton, the creators of the bestselling Treehouse series.
Very Good

Is this the right book for you? Take the ANNOYING TEST and find out!

1) Do you ask 'Are we there yet?' over and over on long car trips?
2) Do you like to drive people mad by copying everything they say and do?
3) Do you hog the shower and use up all the hot water?
4) Do you enjoy asking silly questions that have no real answers?
5) Do you swing on the washing line whenever you get the chance?

SCORE: One point for each yes answer.

3-5 You are a practical joking genius. You will love this book.

1-2 You are a good practical joker. You will love this book.

0 You are not a practical joker. You will love this book.

Just Annoying is the second book in this hilarious series of stories about the world's most annoying practical joker - from the creators of the bestselling Treehouse series, Andy Griffiths and Terry Denton.

Andy Griffiths is an internationally successful, award-winning children's author. His books have been bestsellers in his homeland Australia, the USA and the UK. He is the co-creator of the bestselling, award-winning Treehouse series with illustrator Terry Denton, which has been published in over thirty countries. Andy thrives on having an audience: he has worked as a high school teacher; been the lead singer in a rock band and a stand-up comedian. He has two daughters and lives in Melbourne, Australia.

Terry Denton is a bestselling and award-winning writer and illustrator based in Melbourne, where he lives by the beach with his wife and three kids. He has won more than fifteen children's choice awards throughout Australia and is the co-creator of the bestselling Treehouse series with author Andy Griffiths. As well as being an illustrator, Terry is a fine artist and has held several exhibitions around inner Melbourne.

GOR010383863
Just Annoying by Andy Griffiths
Andy Griffiths
Just
Used - Very Good
Paperback
Pan Macmillan
2019-09-01
176
1529022924
9781529022926
N/A
Book picture is for illustrative purposes only, actual binding, cover or edition may vary.
This is a used book - there is no escaping the fact it has been read by someone else and it will show signs of wear and previous use. Overall we expect it to be in very good condition, but if you are not entirely satisfied please get in touch with us.