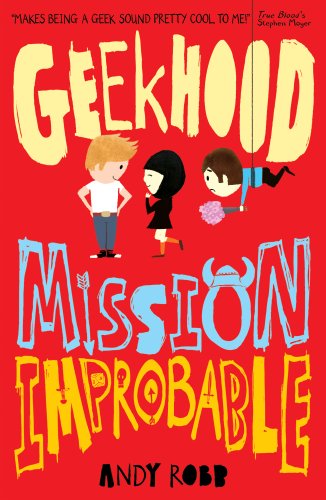 Used Price
$15.49
inc. GST
Free Shipping in Australia
Archie the Geek has a whole new role to play. In his fantasy world, Archie would have won the girl's undying love and defeated his tormenting bullies by now. But reality has other ideas. Enter Claire, a girl with a cunning plot to get her and Archie's crushes to notice them: pretend to be going out with one another.
Reviews:
Trustpilot
Very Good

Archie is a Geek to his core - and despite having a Close Encounter with Sarah at the beginning of term, he's still completely clueless about girls. Enter Clare - an older woman (she's sixteen) who Archie meets on his weekend trip to see his dad and his nightmare step-mum, Jane. Clare and Archie hit it off - and she comes up with a brilliant, foolproof way to get their crushes to notice them: pretend to be going out with one another! What can possibly go wrong? With school, Sarah, a fake girlfriend and his insane family to deal with, Archie and his mates step-up the nerdiness and go Live Action Role-play gaming. Ladies and gentlemen, we are entering a new era...

"A deliciously tender story that wittily captures the ecstasy and agony of being a teenager." Julia Eccleshare, Lovereading4kids.

"This book makes being a geek sound pretty cool to me!" True Blood's Stephen Moyer.

Andy Robb was born in Devon. Once he realized that he was too short to be taken seriously as a costumed hero, he decided to spend as much time as he could playing make-believe. After training as an actor, he went on to appear in plays, TV dramas and films. Andy lives in a house boat on the Thames.

GOR005358379
Geekhood: Mission Improbable by Andy Robb
Andy Robb
Geekhood
Used - Very Good
Paperback
Little Tiger Press Group
2013-04-01
352
184715364X
9781847153647
N/A
Book picture is for illustrative purposes only, actual binding, cover or edition may vary.
This is a used book - there is no escaping the fact it has been read by someone else and it will show signs of wear and previous use. Overall we expect it to be in very good condition, but if you are not entirely satisfied please get in touch with us.