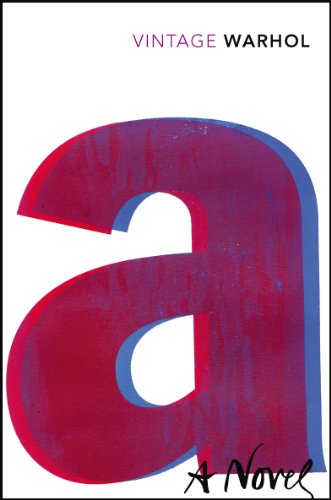 A: A Novel
by Andy Warhol

Out of Stock
$28.49
inc. GST
In the late 1960s Andy Warhol, one of the most influential artists of the twentieth century, set out to turn an ordinary book into a piece of pop art.
Very Good
Only 0 left

A: A Novel Summary

A: A Novel by Andy Warhol

In the late 1960s Andy Warhol, one of the most influential artists of the twentieth century, set out to turn an ordinary book into a piece of pop art. He said that he wanted to create a 'bad' novel 'because doing something the wrong way always opens doors'. The result was this astonishing account of the famously influential group of artists, superstars, addicts and freaks who made up the world of Warhol's Factory. a: a novel was created from audiotapes recorded in and around the Factory between August 1965 and May 1967 and transcribed verbatim, complete with typos and missing words. It begins with the fabulous Warhol superstar Ondine popping pills and follows its characters as they converse with inspired, speed-driven wit and cut swathes through the clubs, coffee shops, hospitals and whorehouses of 1960s Manhattan. This is a unique conceptual project -- part novel, part artwork -- and is the perfect literary manifestation of Andy Warhol's pop art sensibility.

A: A Novel Reviews

Andy Warhol was born in 1928 in Pittsburgh, Pennsylvania. He worked as a commercial artist throughout the 1950s before emerging as a key proponent of the Pop Art movement in the 1960s. His his famous works include the paintings Campbell's Soup Cans and Marilyns, and the film Chelsea Girls. He also published the books The Philosophy of Andy Warhol (from A to B and Back Again) and POPism. Warhol died in 1987.

GOR005253306
A: A Novel by Andy Warhol
Andy Warhol
Used - Very Good
Paperback
Vintage Publishing
2011-09-15
464
0099528789
9780099528784
N/A
Book picture is for illustrative purposes only, actual binding, cover or edition may vary.
This is a used book - there is no escaping the fact it has been read by someone else and it will show signs of wear and previous use. Overall we expect it to be in very good condition, but if you are not entirely satisfied please get in touch with us.