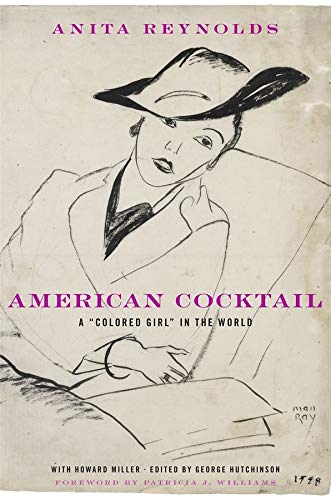 Used Price
$47.99
inc. GST
Free Shipping in Australia
This is the rollicking, never-before-published memoir of a fascinating African American woman with an uncanny knack for being in the right place in the most interesting times. Actress, dancer, model, literary critic, psychologist, and free-spirited provocateur, Anita Reynolds was, as her Parisian friends nicknamed her, an American Cocktail.
Very Good

American Cocktail: A "Colored Girl" in the World by Anita Reynolds

This is the rollicking, never-before-published memoir of a fascinating woman with an uncanny knack for being in the right place in the most interesting times. Of racially mixed heritage, Anita Reynolds was proudly African American but often passed for Indian, Mexican, or Creole. Actress, dancer, model, literary critic, psychologist, but above all free-spirited provocateur, she was, as her Parisian friends nicknamed her, an "American cocktail."

One of the first black stars of the silent era, she appeared in Hollywood movies with Rudolph Valentino, attended Charlie Chaplin's anarchist meetings, and studied dance with Ruth St. Denis. She moved to New York in the 1920s and made a splash with both Harlem Renaissance elites and Greenwich Village bohemians. An emigre in Paris, she fell in with the Left Bank avant garde, befriending Antonin Artaud, Man Ray, and Pablo Picasso. Next, she took up residence as a journalist in Barcelona during the Spanish Civil War and witnessed firsthand the growing menace of fascism. In 1940, as the Nazi panzers closed in on Paris, Reynolds spent the final days before the French capitulation as a Red Cross nurse, afterward making a mad dash for Lisbon to escape on the last ship departing Europe.

In prose that perfectly captures the globetrotting nonchalance of its author, American Cocktail presents a stimulating, unforgettable self-portrait of a truly extraordinary woman.

Anita Reynolds was African American but could 'pass' for a variety of backgrounds, and the French called her an 'American cocktail.' This biography highlights her forgotten, extraordinary life, from life as a silent film star with Rudolph Valentino to falling in with the Left Bank intellectuals and artists like Pablo Picasso. Fascinating.-- (03/24/2014)
Reynolds's story gives us, first, an unvarnished look into the lives of politically active, upper-middle-class African-Americans at the dawn of the Harlem Renaissance. Replete with rich interior portraits and abundant material details, it illuminates the inner life of a young woman who was, in different settings, brown, black, and colored. As an arc, it covers her coming of age in the United States, her clever escape to Paris, her life as a fixture of the Left Bank, and, finally, her forced departure from Europe as the Nazis advanced...Judged merely as a piece of history, American Cocktail is a critical missing piece. There is more, though. Describing a life not defined by the color line, it is also written against dominant social conventions, legal categories, and popular formulations. Its emphasis on 'fun' sets it apart--in tone and spirit--from more dystopian, 'tragic' accounts of mixture. American Cocktail reminds us, too, of the lure of the larger world as an escape from the brutal demands of American racism...In this moment of racial complexity, we have a new history of racial mixture and a renewed appreciation for the lives of those who (like Reynolds) recognized that resistance to racism didn't just mean organized revolution along the color line. It could also mean an individual rejection of the very terms of the struggle.-- (04/14/2014)
American Cocktail: A 'Colored Girl' in the World is the recently discovered memoir of Anita Reynolds, an irrepressible chameleon who rubbed shoulders with Harlem Renaissance literati, modeled for Coco Chanel and so much more.--Essence (02/01/2014)

[This is] the Zelig-like memoirs of Anita Reynolds, an African-American actress, model and dancer who crossed paths with many writers and cultural figures of the time, such as Booker T. Washington, James Joyce and Larsen herself...American Cocktail is a welcome addition to the sparse collection of twentieth-century memoirs written by
African American women.

-- (06/20/2014)
[Reynolds's] exuberant and inclusive cosmopolitanism is one of the great strengths of this singular memoir...If there has long been a scarcity of insight and gossip about friends, acquaintances, and colleagues in most early black life-stories, if one looks in vain for details and private opinions about encounters with the famous and infamous, with household names in politics, the arts, commercial enterprise, and sports, Reynolds all but single handedly makes up for it. Famous names are not simply dropped here and there, they are scattered about like handfuls of confetti, from the first chapter to the last. Reynolds readily shares brusque evaluations and anecdotes about Gertrude Stein, e.e. cummings, Paul Robeson, Salvador Dali, Constantin Brancusi, Tristan Tzara, Jean Patou, and dozens more. She tells about modeling for Coco Chanel and wearing the designer's castoffs; about writing for spicy French journals; and as the war escalated, about being a Red Cross nurse securing safe passage for refugees... Reynolds carries the reader along with a lively tale brimming with places, eras, family history, political movements, art, music, literature, and the people who created them, while throughout, Hutchinson provides discreet endnotes with his wonderfully researched and beautifully wrought amplification. Some of the notes are brief nuggets of clarification, while others are elegant miniature essays. All answer questions and expand upon things that Reynolds, in sketching her vivid self-portrait, does not stop to explain. More than endnotes, Hutchinson has crafted a running commentary, available to consult as one wishes, often pulling the reader into a bit of collusion with the editor.-- (07/01/2014)
Beautiful, vivacious, stylish, and free-spirited, Reynolds (1901-80) was asked about her 'racially ambiguous appearance' so often that she came up with 'American cocktail' to describe her 'red, white, and black' legacy. A dancer, actor, psychologist, and teacher, Reynolds recorded this archly witty, sexually frank, nonchalantly confident, yet curiously humble memoir in the mid-1970s, and it is published now for the first time, thanks to its discovery by Cornell professor George Hutchinson. Reynolds jauntily describes her lively, privileged childhood in Chicago and Los Angeles among her extended multiracial family, which included her cousin, Langston Hughes... Dizzying tales of famous artists and writers, escapades and affairs, sojourns in Tangiers and London, and harrowing moments as WWII begins are punctuated by confrontations with prejudice and hate. Kudos to Hutchinson for bringing this independent and intrepid citizen of the world back to shimmer and shine among us, carrying forward her 'guiding passion to try to improve racial relationships, to get people of different nationalities, colors and religions to understand and appreciate each other.'-- (02/01/2014)
Contemporary It girls have nothing on the free spirits of the 1920s, who danced the Charleston, turned cartwheels on the sidewalk, and drank gin blossoms till dawn. (Just imagine if they'd had Instagram.) But few crashed the party with the verve, elegance, and wit of Anita Reynolds, whose impossibly seductive memoir, American Cocktail: A "Colored Girl" in the World, recently uncovered by a Cornell professor, captures the Jazz Age from her sexually candid, devil-may-care perspective. Reynolds was born into a politically engaged, mixed race family in Los Angeles--Langston Hughes was a cousin; Booker T. Washington was a friend; W. E .B. du Bois a likely first lover--and starred in some of the first films produced by blacks in Hollywood before moving on to New York, where she hobnobbed with Harlem Renaissance elite, and then, absconding with her college tuition, sailed to Paris in 1928. Coining the term 'American cocktail' to describe her 'red, white, and black' ancestry, Reynolds made a splash amid the Left Bank art scene, attracting the likes of Matisse, who sketched her, and Man Ray, who became a friend and mentor. With a mordant lightness of touch, Reynolds retells her Zelig-like escapades, from modeling for Chanel to a breakfast with Madame Petain--just before a mad dash to the last boat from Lisbon, panicked refugees and couture dresses in tow, as Nazi panzers closed in on Paris.-- (02/25/2014)
Reynolds's memoir of her adventures in 1930s Paris and Europe, before World War II drove her back to the United States, was written in the 1970s but was never published. After a brief silent movie career and an 'uptown/downtown' period hobnobbing with Harlem's intelligentsia as well as Greenwich Village's bohemians, the racially mixed author decamped to Europe at just the right time to meet such luminaries as Man Ray, Antonin Artaud, Louise Bryant, and many others. She lived the Left Bank life, with many forays into respectability (or something like it), traveling between the two worlds effortlessly... Her lavish descriptions of the clothes she wore, the men she loved, and the places where she dined and danced enchant, and her frank discussion of sex is refreshing. Hutchinson's detailed chapter notes provide invaluable biographical and cultural info... This title is essential for those who enjoy reading about the African American expat experience, as well as fans of Paris memoirs.--Liz French "Library Journal "

GOR005743245
American Cocktail: A "Colored Girl" in the World by Anita Reynolds
Anita Reynolds
Used - Very Good
Hardback
Harvard University Press
2014-02-07
352
0674073053
9780674073050
N/A
Book picture is for illustrative purposes only, actual binding, cover or edition may vary.
This is a used book - there is no escaping the fact it has been read by someone else and it will show signs of wear and previous use. Overall we expect it to be in very good condition, but if you are not entirely satisfied please get in touch with us.