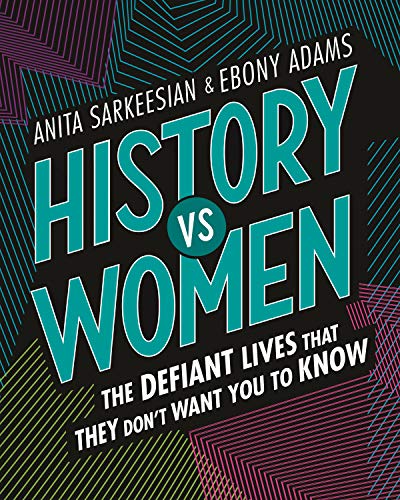 History vs Women
by Anita Sarkeesian

Used Price
$30.99
inc. GST
Free Shipping in Australia
Rebels, rulers, scientists, artists, warriors and villains. Women are, and have always been, all these things and more.
Very Good

History vs Women: The Defiant Lives that They Don't Want You to Know by Anita Sarkeesian

Looking through the ages and across the globe, Anita Sarkeesian, founder of Feminist Frequency, along with Ebony Adams PhD, have reclaimed the stories of twenty-five remarkable women who dared to defy history and change the world around them. From Mongolian wrestlers to Chinese pirates, Native American ballerinas to Egyptian scientists, Japanese novelists to British prime ministers, History vs Women will reframe the history that you thought you knew. Featuring beautiful full-colour illustrations of each woman and a bold graphic design, this standout nonfiction title is the perfect read for teens (or adults!) who want the true stories of phenomenal women from around the world and across generations whose lives and accomplishments impacted both their societies and our own.

"Readers of all ages, across the globe and socioeconomic spectrum, can find an icon to look up to within these pages. Filled with strength, this collection is incredibly inspiring and will instill in teens a take-charge attitude and powerful mind-set." -- School Library Journal, Starred Review

"This collective biography of women who have boldly made their marks on a world that often took great pains to deny them makes a concentrated effort to shine a spotlight on those outside of the white, Western canon...This engaging, crisply designed book attempts to break barriers at every opportunity....A superbly well-rounded addition for collections looking to expand beyond recitations of the familiar." --Booklist, Starred Review

Anita Sarkeesian is an award-winning media critic and the creator and executive director of Feminist Frequency, an educational nonprofit that explores the representations of women in pop culture narratives.Best known as the creator and host of Feminist Frequency's highly influential series Tropes vs. Women in Video Games, Anita lectures at universities, conferences and game development studios around the world. Anita dreams of owning a life-size replica of Buffy's scythe. She is the coauthor of History vs Women.

Ebony Adams, Ph.D. is an author, activist, and former college educator whose work foregrounds the lives and work of black women in the diaspora. She lives in Los Angeles with a steadily-increasing collection of Doctor Who memorabilia. She writes widely on film criticism, social justice, and pop culture, and is the coauthor of History vs Women.

Born under the Brixton sun in London, England, artist T. S. Abe is a graduate of Central Saint Martins University of the Arts. Her drawings have been featured on album covers, in exhibitions, on a London bus, and in History vs. Women: The Defiant Lives That They Don't Want You to Know.

GOR010744394
History vs Women: The Defiant Lives that They Don't Want You to Know by Anita Sarkeesian
Anita Sarkeesian
Used - Very Good
Hardback
Feiwel and Friends
2018-10-22
144
1250146739
9781250146731
N/A
Book picture is for illustrative purposes only, actual binding, cover or edition may vary.
This is a used book - there is no escaping the fact it has been read by someone else and it will show signs of wear and previous use. Overall we expect it to be in very good condition, but if you are not entirely satisfied please get in touch with us.