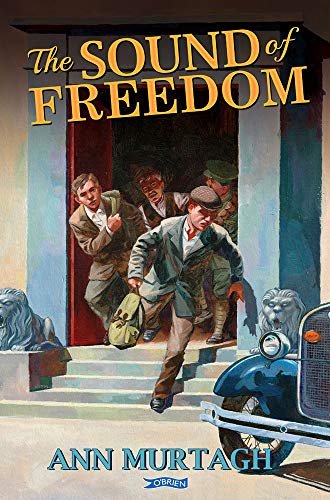 The Sound of Freedom by Ann Murtagh

Will Colm stay in Ireland and join the Volunteers or will he fulfil his dream of working as a musician in America? A long-held family secret comes to light, rocks Colm's world and shows him the way to go.

The Sound of Freedom by Ann Murtagh

It's spring 1919. Ireland's War of Independence has just begun. In a cottage in County Westmeath, thirteen-year-old Colm Conneely longs to join the local Volunteers, the 'Rainbow Chasers' who dream of an independent Ireland. Caught up in republican fever, he smuggles guns, stands up to the RIC during a house raid and raises the tricolour on a lake island.

But Colm is also chasing another rainbow - he dreams of a life in America working as a fiddle player and involved in the republican movement there. The arrival in the area of spirited Belfast girl Alice McCluskey is a new development in Colm's life. She speaks Irish, shares his love of Irish music and is also committed to the 'cause'.

Will Colm stay in Ireland and join the Volunteers or will he fulfil his dream of working as a musician in America? A long-held family secret comes to light, rocks Colm's world and shows him the way to go.

another fine piece of children's fiction from O'Brien Press, a publishing company determined to keep Irish history alive for younger readers ... as readers, we are transported back to 1919 and given the opportunity to get a sense of what it must have been like as an Irish citizen during this period ... The book strikes the right balance of humour, suspense, intrigue and poignancy, while also providing us with important historical insights, making it a highly entertaining read for children in the middle to senior classes in primary school - Reviewed by Duncan McCarthy, St Anthony's BNS, Cork for InTouch Magazine

action-packed ... I just couldn't put it down

Compelling, clear writing tells us a story of history and destiny; not just of the Irish nation, but of personal impact ... an ordinary boy caught in extraordinary times as he longs to carve his own path in life, follow his dreams and to be part of something bigger, even if only a small part ... a story of history that has resonance today and begs us to think on the multi-layer nature of our own personal histories. A real 'who-do-you-think-you-are' kind of book; full of feeling, truly fascinating, a vivid portrait of this moment in time and simply wonderful

ideal for curious minds, this is a spirited adventure set during Ireland's War of Independence

she does what O'Brien Press authors do best, and narrates history through the eyes of a young central character to whom readers of a similar age can relate ... her well-crafted tale not only bringing Irish history to a new generation but entwining readers young and not-so young in a web of intrigue and family secrets that surely begs a sequel

well-crafted tale ... bringing Irish history to a new generation ... entwining readers young and not-so-young in a web of intrigue and family secrets that surely begs a sequel

* The Nationalist, Carlow and Kildare Editions *

a stirring, fast-paced novel set in 1919 ... full of authentic detail

this book is a great read for anyone who likes Irish history. I think if you have read books about 1916 you would enjoy this book as it tells you about what happened after the Easter Rising in Ireland. I liked the book because it was set in a time in history I find interesting. I have read a few books on the Easter Rising and have visited the GPO but I didn't know much about what happened in the years after 1916. This book gave me a real insight in what life was like for someone my age during this period in Irish history ... I would recommend this book for children aged 10+ and especially to readers who like Irish history. I really enjoyed this book and I would score it 8/10. By Holly, 5th Class, St. Louis Senior Primary School, Rathmines, Dublin 6.

Colm is a young man steeped in traditional Irish music, living through turbulent times in Ireland, 1919. The politics of the time and his father's status as a Sinn Fein party member means that the family are constantly under threat of visits from the Royal Irish Constabulary. Ann Murtagh's terrific historical novel paints a vivid picture of a young man fully committed to the politics of a free Ireland whilst also coming to terms with entering adulthood and finding his way in life.

* Children's Books Ireland *
Ann Murtagh spent her first seven years in the Bronx, New York. After a short time in Dublin, her family moved to Kells, Co. Meath. She qualified as a primary teacher and later received an MA in Local History from NUI Maynooth. A member of both Meath Archaeological and Historical Society and Kilkenny Archaeological Society, she has given lectures to both groups. Ann has designed and facilitated history courses for teachers both locally and nationally. She has three sons, Daniel, Bill and Matt, and lives with her husband, Richard, and two dogs in Kilkenny City.
GOR010872643
The Sound of Freedom by Ann Murtagh
Ann Murtagh
Used - Like New
Paperback
O'Brien Press Ltd
2020-02-17
240
1788491254
9781788491259
N/A
Book picture is for illustrative purposes only, actual binding, cover or edition may vary.
The book has been read, but looks new. The book cover has no visible wear, and the dust jacket is included if applicable. No missing or damaged pages, no tears, possible very minimal creasing, no underlining or highlighting of text, and no writing in the margins
Trustpilot