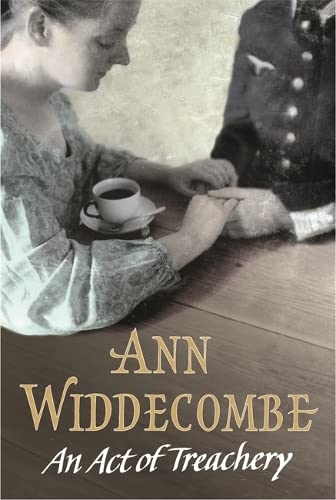 An Act of Treachery
by Ann Widdecombe

Out of Stock
$15.99
inc. GST
Second novel by controversial Tory MP whose debut novel, THE CLEMATIS TREE, became the surprise bestseller of 2000.
Very Good
Only 0 left

An Act of Treachery Summary

An Act of Treachery by Ann Widdecombe

Ann Widdecombe turns to a totally different period and a different milieu: the French resistance in the Second World War, for a new and just as compelling novel.

Catherine Dessin is fifteen and still at convent school when the Germans enter Paris in 1940. Her parents are patriots and she is taught to hate the enemy, but two years later she falls in love with a senior and married German officer, defying the anger of her family and friends. The strains which this act of treachery place on those who love her and the tensions it create as she turns from her Roman Catholic upbringing form the background to an unusual and doomed lovestory. Catherine grows up abruptly when Klaus, the German officer, returns from a spell home having realised for the first time the evil of the regime he is serving. Klaus now struggles with his own conflict of loyalties - between Catherine and his family and between his patriotic duty and his hatred of Nazism. Wary of those on whom they should rely, they become closer to each other. Rejected by her family, quietly ignored by friends, Catherine has to cope with the unforgiving aftermath of liberation. With insights into character that were widely recognised in her first novel, Ann Widdecombe twists and turns the plot to a surprising yet satisfying conclusion.

An Act of Treachery Reviews

Ann has now finished her main tour, ending on Friday with a signing at John Lewis in Bluewater where we sold 125 copies, a pretty good note to end on! She still has a further 9 events to do throughout the rest of the year. The launch party at the Imperial War Museum on 11 July went extremely well with diaries stories running in the EVENING STANDARD, SUNDAY TELEGRAPH, THE OBSERVER, THE TIMES and INDEPENDENT ON SUNDAY. And just to remind you of all the publicity that she has done:Extract and first interview in Night and Day (THE MAIL ON SUNDAY), 16 June together with interviews in THE TIMES, 9 July, THE INDEPENDENT, You Ask the Questions, 25 July, THE SUNDAY EXPRESS, 7 July, THE GLASGOW HEARLD, 1 July, SCOTLAND ON SUNDAY, 7 July, METRO 60 SECOND INTERVIEW 22 July, HELLO Magazine (on the books page), YOURS MAGAZINE (Sept issue), THE SUNDAY TIMES Relative Values, STEVE WRIGHT SHOW (BBC Radio 2) 5 July, START THE WEEK (BBC RADIO 4) 8 July, C5 NEWS on 8 July, LBC, HEART 106.2FM, BBC RADIO NORTHAMPTON, BBC RADIO SCOTLAND, BBC HEREFORD AND WORCESTER, BBC RADIO WALES, BBC RADIO SUFFOLK BBC GMR, BBC RADIO YOUK, BBC RADIO WM, DREAM 107.5M, SUNDAY MERCURY (Birmingham), YORKSHIRE EVENING PRESS and THE EAST ANGLIAN DAILY TIMES. Most of the national papers have now reviewed the book and as we predictedsome of the literary editors have let their reviewers review Ann rather thanthe novel but we've also had some which have reviewed the novel producing some good reviews: 'The novel is very well structured....... Widdecombe is to be applauded for the range of her ambition within this book: the admirably large cast of characters is well handled; their dilemmas are believable and the narrative makes for compulsive reading. What is more, AN ACT OF TREACHERY seems fuelled by a genuine passion for an understanding acrosss nations and borders.'Bell Mooney, THE TIMES 'She shows insight into the difficulties of ordinary people responding to the enemy in everyday encounters and the gradual deterioration in the position of the Jewish population. Her plot has ingenious twists which surprise the reader and her prose has pace.'Sarah Curtis, THE TLS'Widdecombe's point is a powerful one: that everyone is compromised in war and that only love commands real loyalty.'Wendy Holden, THE DAILY MAIL 'Miss Widdecombe's research is good and description of life in occupied Paris convincing.'Maggie Pringle, THE EXPRESS 'An ambitious novel,...stuffed full of interesting moral themes.'Caroline Moore, SUNDAY TELEGRAPH 'An intriguing story, which seems destined to end in disaster until the unexpected twist in the final pages.'GOOD HOUSEKEEPING 'I fully expected to want to put this book down after the first 20 pages. By page 30, I was hooked...... Widdecombe's betrayalof life in occupied France is both graphic and moving. Her research has beenextensive and she avoids sterotypes. Her story develops gradually and impressively towards its conclusion, which although not a surprise, is still shocking.'Iain Dale, THE TRIBUNE Together with reviews in the EVENING STANDARD, DAILY TELEGRAPH and SUNDAY TIMES. We still have reviews to come in the NEW STATESMAN and THE SPECTATOR. AN ACT OF TREACHERY was also featured as one of the DA

GOR001036067
An Act of Treachery by Ann Widdecombe
Ann Widdecombe
Used - Very Good
Hardback
Orion Publishing Co
2002-07-11
352
0297645730
9780297645733
N/A
Book picture is for illustrative purposes only, actual binding, cover or edition may vary.
This is a used book - there is no escaping the fact it has been read by someone else and it will show signs of wear and previous use. Overall we expect it to be in very good condition, but if you are not entirely satisfied please get in touch with us.