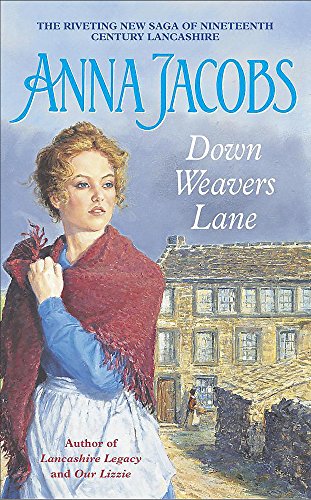 Down Weavers Lane
by Anna Jacobs

Down Weavers Lane by Anna Jacobs

'Best period book I have EVER read! - 5-star reader review'

Emmy Carter's mother is a prostitute - and her life has made Emmy determined to avoid the same fate. But Emmy is beautiful, so attracts unwanted attention; her mother's protector has his eye on her, as does evil Marcus Armistead, her employer's nephew. Marcus is excited by Emmy's virginity and has her kidnapped, but Emmy hits him over the head and escapes. Marcus, futher enraged, kills her mother and becomes even more determined to rape Emmy, but the combined efforts of the local parson and Emmy's young suitor manage to keep her safe from harm. Finally Emmy sees Marcus get his just desserts, finds out who her father was, and attains the respectability she has so longed for.

What readers are saying about DOWN WEAVER'S LANE

'Could not put this book down' - 5 stars

'Such a brilliant writer . . . once you start to read this book you won't be able to put it down' - 5 stars

'This book was brilliant - get the tissues ready!' - 5 stars

Catherine Cookson fans will cheer! * Peterborough Evening Telegraph on Our Polly *
Industrial Lancashire in the 1830s with the daughter of a prostitute determined to avoid her mother's plight * The Bookseller - Paperback Preview *
Brilliant, no one can match her writing ability . . . I have just finished reading it, couldn't put it down, it held me absorbed on every page. * Amazon reader on Lancashire Lass *

GOR000472552
Down Weavers Lane by Anna Jacobs
Anna Jacobs
Used - Good
Paperback
Hodder & Stoughton General Division
2002-09-05
512
0340750596
9780340750599
N/A
Book picture is for illustrative purposes only, actual binding, cover or edition may vary.
This is a used book - there is no escaping the fact it has been read by someone else and it will show signs of wear and previous use. Overall we expect it to be in very good condition, but if you are not entirely satisfied please get in touch with us.