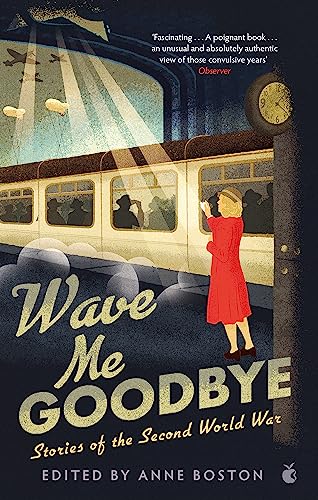 Wave Me Goodbye
by Anne Boston

In Stock
$18.49
+10% GST
Published to mark the 80th anniversary of the start of the Second World War, these are powerful wartime stories written by the finest women writers of that generation.
Very Good
Only 1 left

Wave Me Goodbye: Stories of the Second World War by Anne Boston

This collection of wartime stories includes some of the finest writers of a generation. War had traditionally been seen as a masculine occupation, but these stories show how women were equal if different participants. Here, war is less about progress on the frontline of battle than about the daily struggle to keep homes, families and relationships alive; to snatch pleasure from danger, and strength from shared experience. The stories are about saying goodbye to husbands, lovers, brothers and sons - and sometimes years later trying to remake their lives anew. By turn comical, stoical, compassionate, angry and subversive, these intensely individual voices bring a human dimension to the momentous events that reverberated around them and each opens a window on to a hidden landscape of war.

Written in and about the decade 1939-1949, the stories in this high caliber anthology are the work of women, chiefly English (five Americans are represented), who were actively engaged in the war effort on the home front. The experience of war--the London blitz, evacuation, the fronts in Europe and Africa--become personalized in stories from Barbara Pym, Rosamond Lehmann, Sylvia Townsend Warner, and others as notable ... the stories poignantly illuminate the ``second war'' behind the frontlines. * Publishers Weekly *
This is as stark and acidic a collection of war stories as you will read ... Stripped bare of the sentimentalism attached to love in wartime, writers such as Elizabeth Bowen, Jean Rhys, Beryl Bainbridge and Dorothy Parker provide poignant, wry, subversive tales ... Revelatory reading * Scotsman *
Fascinating ... a poignant book ... an unusual and absolutely authentic view of those convulsive years * Observer *
Each voice is individual and unsentimental ... Molly Lefebure and Margery Sharp write succinctly of the Blitz, while in Miss Anstruther's Letters, Rose Macaulay brilliantly paints spiritual as well as material devastation * Daily Telegraph *
Each story in Wave Me Goodbye is a relic of the Second World War * Sunday Times *

GOR010098416
Wave Me Goodbye: Stories of the Second World War by Anne Boston
Anne Boston
Virago Modern Classics
Used - Very Good
Paperback
Little, Brown Book Group
2019-08-27
384
034901261X
9780349012612
N/A
Book picture is for illustrative purposes only, actual binding, cover or edition may vary.
This is a used book - there is no escaping the fact it has been read by someone else and it will show signs of wear and previous use. Overall we expect it to be in very good condition, but if you are not entirely satisfied please get in touch with us.