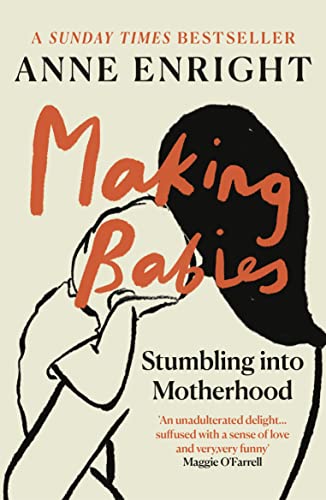 Out of Stock
$20.49
inc. GST
Anne Enright, one of Ireland's most remarkable writers, has just had two babies: a girl and a boy. An antidote to the high-minded, polemical 'How-to' baby manuals, Making Babies also bears a visceral and dreamlike witness to the first years of parenthood.
Very Good
Only 0 left

Anne Enright, one of Ireland's most remarkable writers, has just had two babies: a girl and a boy. Making Babies, is the intimate, engaging, and very funny record of the journey from early pregnancy to age two. Written in dispatches, typed with a sleeping baby in the room, it has the rush of good news - full of the mess, the glory, and the raw shock of it all. An antidote to the high-minded, polemical 'How-to' baby manuals, Making Babies also bears a visceral and dreamlike witness to the first years of parenthood. Anne Enright wrote the truth of it as it happened, because, for these months and years, it is impossible for a woman to lie.

"1000 kilometres away from baby whisperer books, and one every petrified parent-to-be should read." -- Sinead Gleeson * Image *
"Fizzingly entertaining. Reading it is like having a conversation with your funniest friend. Enright has pulled off that rarest of tricks: writing brilliantly about happiness" * Sunday Times *
"Making Babies is an absolute joy, the perfect, intelligent antidote to poisonous books on the subject" -- India Knight
"An unadulterated delight...suffused with a sense of love and very, very funny" -- Maggie O'Farrell * Daily Telegraph *
"Gasp-making, jaw-dropping and eloquently astounding" * Irish Indepedent *

Anne Enright was born in Dublin, where she now lives and works. She has published two collections of stories, collected as Yesterday's Weather, one book of non-fiction, Making Babies, and six novels, including The Gathering, which won the 2007 Man Booker Prize, The Forgotten Waltz, which was awarded the Andrew Carnegie Medal for Excellence in Fiction, and The Green Road, which was the Bord Gais Energy Novel of the Year and won the Kerry Group Irish Fiction Award. In 2015 she was appointed as the first Laureate for Irish Fiction, and in 2018 she received the Irish PEN Award for Outstanding Contribution to Irish Literature.

GOR001034794
Making Babies: Stumbling into Motherhood by Anne Enright
Anne Enright
Used - Very Good
Paperback
Vintage Publishing
2005-08-04
208
0099437627
9780099437628
N/A
Book picture is for illustrative purposes only, actual binding, cover or edition may vary.
This is a used book - there is no escaping the fact it has been read by someone else and it will show signs of wear and previous use. Overall we expect it to be in very good condition, but if you are not entirely satisfied please get in touch with us.