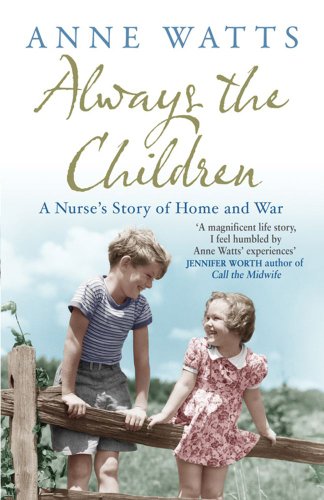 Always the Children
by Anne Watts

In Stock
$15.49
inc. GST
A vivid and moving memoir of a young nurse who left behind an idyllic rural life in post-war Britain to work in the world's most hostile places.
Very Good Good
7 in stock

Always the Children: A Nurse's Story of Home and War by Anne Watts

Anne Watts grew up in a small village in north Wales in the 1940s. Inspired by school geography lessons that told of far-off lands, she broke out of the conventional options open to women in post-war Britain, defying her Merchant Navy father's dated views. She trained as a nurse and midwife, joined the Save the Children Fund, and was posted to Vietnam in 1967.

One of only three British nurses in the region, Anne was faced with a vision of hell that her training at Manchester's Royal Infirmary had barely prepared her for. Thrown in at the deep end, she witnessed the random cruelty of warfare, nursing injured and orphaned children and caring for wounded and dying servicemen. She went on to take her skills to the victims of Pol Pot's Khmer Rouge in Cambodia, to Lebanon during the Israeli occupation, and Saudi Arabia during Desert Storm. Over some forty-five years Anne has brought her courage and compassion to those most in need of help.

Woven into this vivid, compelling memoir is perhaps the most moving story of all - how Anne's idyllic childhood was shattered by a shocking family tragedy when she was 10 years old. A tragedy that was to shape her destiny.

'Anne Watts chose a life of dedication as a nurse and had to deal with human wreckage at its most heart-rending, but the devotion and sympathetic force she brings to dealing with it suggest there just might be some hope for humanity yet' Clive James A magnificent life story. I feel humbled by Anne Watts' experiences' Jennifer Worth intensely moving ' Daily Express 25/6 'a vivid, humbling memoir' arle Richardson, Yours ne way or another, war has shaped and dictated the remarkable life story of nurse Anne Watts... Now approaching her 70th birthday, Watts has put pen to paper and recorded her truly incredible story as a tribute to the children to whom she brought hope, and the young soldiers whose hands she held as they died. And what shines through the horror, the pain and the utter futility of war is Watts' inspirational devotion, her spirit of adventure and her will to alleviate suffering whatever or wherever it might be. Her story is made all the more extraordinary by a bizarre and shocking sequence of events -- a tragic reminder of the consequences of the buttoned-up Fifties -- which destroyed her childhood and culminated in her mother's premature death. But Watts is a survivor...she learned from her experiences but never allowed them to inhibit her own capacity for compassion. ...ALWAYS THE CHILDREN is a humbling, terrifying, shocking and yet strangely uplifting story of one woman's selfless devotion and her undiminished determination to alleviate the suffering of her fellow human being. If you only read one book in 2010, make it this one.' ancashire Evening Post 'A vivid and moving memoir' ournemouth Daily Echo 'Anne Watts' memoir has so many impressive elements, it's hard to give it the praise it, and she, deserve ... This is a tale of real courage and devotion to other people's children. The word heroine has rarely been used so pertinently' bigail Kemp, Manchester Evening News

Anne Watts was born in 1940, completed her training as a nurse and midwife at Manchester Royal Infirmary in 1961, and went on to work in some the world's most turbulent war zones from the 1960s through to the 1980s. Her life story reads like a chronicle of the past seven decades of world history. She lives in Devon and London and has now embarked on a career as a writer. Always the Children: A Nurse's Story of Home and War is her first book.