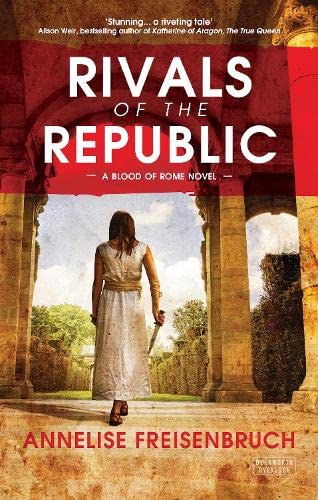 Rivals of the Republic
by Annelise Freisenbruch

Rivals of the Republic Summary

Rivals of the Republic by Annelise Freisenbruch

Using her supreme knowledge of the period, author Annelise Freisenbruch presents the great new heroine of historical fiction, Hortensia, who must navigate the male-dominated courts of law in her quest to uncover a sinister plot to overthrow the Republic. Drawing from historical accounts of the daughter of famed Roman orator Quintus Hortensius Hortalus, Freisenbruch delivers an atmospheric, meticulously accurate and fast-paced story that will have readers craving more. Rome, 70BC. Roman high society hums with gossip about the suspicious suicide of a prominent Roman senator and the body of a Vestal Virgin is discovered in the river Tiber. As the authorities turn a blind eye, Hortensia is moved to investigate a trail of murders that appear to lead straight to the dark heart of the Eternal City.

Rivals of the Republic Reviews

'Freisenbruch deftly intertwines her plot with the politics of the late republic... and the layers of life, crime and grime in that most fascinating of cities... I look forward to Hortensia's next adventures.'

'Brilliant... an enthralling and convincing imagining of Ancient Rome.'

-- Harry Sidebottom, bestselling author of the Throne of the Caesars series

-- Margaret George, bestselling author of The Memoirs of Cleopatra

'Proper historical fiction... the series can only have lots more to show and I'm excited.'

Annelise Freisenbruch received her PhD in Classics from Cambridge University. She has worked as a researcher for the BBC and has appeared in documentaries about ancient Rome for PBS and CNN. Her first non-fiction book, The First Ladies of Rome: The Women Behind the Caesars, was published to much critical acclaim and has been translated into eight languages. Rivals of the Republic is her first novel.

GOR008749470
Rivals of the Republic by Annelise Freisenbruch
Annelise Freisenbruch
Used - Very Good
Paperback
Prelude
2017-08-10
288
0715652206
9780715652206
N/A
Book picture is for illustrative purposes only, actual binding, cover or edition may vary.
This is a used book - there is no escaping the fact it has been read by someone else and it will show signs of wear and previous use. Overall we expect it to be in very good condition, but if you are not entirely satisfied please get in touch with us.