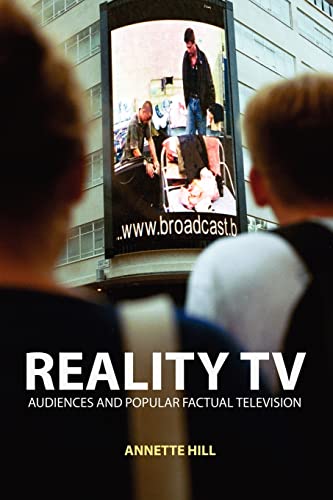 Real TV examines the dual themes of ethics and public interest in relation to the genre of popular factually entertainment.

Reality TV restores a crucial, and often absent, element to the critical debate about reality television: the voices of people who watch reality programmes.

From Animal Hospital to Big Brother, Annette Hill argues that much can be learned from listening to audience discussion about this popular and rapidly changing television genre. Viewers' responses to reality TV can provide invaluable information to enhance our understanding of both the reality genre and contemporary television audiences.

Drawing on quantitative and qualitative audience research to understand how viewers categorise the reality genre, and how they judge the performance of ordinary people and the representation of authenticity within different types of reality programmes.

* Do audiences think reality TV is real?
* Can people learn from watching reality TV?
* How critical are viewers of reality TV?

Reality TV argues that audiences are engaged in a critical examination of the development of popular factual television. The book examines how audiences can learn from watching reality programmes, and how viewers think and talk about the ethics of reality TV.

'This is an important book. It addresses a matter of current concern to all those who study media, and introduces vital new evidence: substantial structured interviews with a wide range of TV viewers.' - John Ellis, Royal Holloway, University of London

'This book is written with clarity and style. Its uses of audience data both develop the argument about the reception of popular television, and open up new issues for discussion.' - John Corner, University of Liverpool

'This is a timely and important volume that will make a significant contribution to debates concerning factual and documentary television.' - Jane Roscoe, Australian Film, Television and Radio School

Annette Hill is a Reader in Communication at the University of Westminster. She is the author of (John Libbey, 1997) co-author of (Routledge, 1999) and co-editor of (Routledge, 2003)
1. Introduction: Reality TV 2. The Rise of Reality TV 3. The Reality Genre 4. Performance and Authenticity 5. The Idea of Learning 6. Ethics of Care 7. Pet Deaths 8. Conclusion: Critical Viewers
GOR003112059
9780415261524
041526152X
Reality TV: Factual Entertainment and Television Audiences by Annette Hill (Lund University, Sweden)
Annette Hill (Lund University, Sweden)
Used - Very Good
Paperback
Taylor & Francis Ltd
2004-11-11
240
N/A
Book picture is for illustrative purposes only, actual binding, cover or edition may vary.
This is a used book - there is no escaping the fact it has been read by someone else and it will show signs of wear and previous use. Overall we expect it to be in very good condition, but if you are not entirely satisfied please get in touch with us
Trustpilot