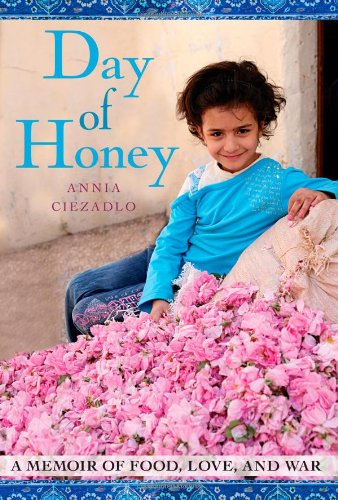 Day of Honey
by Annia Ciezadlo

Day of Honey by Annia Ciezadlo

A luminous portrait of life in the war-torn Middle East, Day of Honey combines the brilliance of From Beirut to Jerusalem with the pleasures of Eat, Pray, Love.

A luminous portrait of life in the Middle East, Day of Honey weaves history, cuisine, and firsthand reporting into a fearless, intimate exploration of everyday survival.

In the fall of 2003, Annia Ciezadlo spent her honeymoon in Baghdad. Over the next six years, while living in Baghdad and Beirut, she broke bread with Shiites and Sunnis, warlords and refugees, matriarchs and mullahs. Day of Honey is her memoir of the hunger for food and friendship--a communion that feeds the soul as much as the body in times of war.

Reporting from occupied Baghdad, Ciezadlo longs for normal married life. She finds it in Beirut, her husband's hometown, a city slowly recovering from years of civil war. But just as the young couple settles into a new home, the bloodshed they escaped in Iraq spreads to Lebanon and reawakens the terrible specter of sectarian violence. In lucid, fiercely intelligent prose, Ciezadlo uses food and the rituals of eating to illuminate a vibrant Middle East that most Americans never see. We get to know people like Roaa, a determined young Kurdish woman who dreams of exploring the world, only to see her life under occupation become confined to the kitchen; Abu Rifaat, a Baghdad book lover who spends his days eavesdropping in the ancient city's legendary caf s; Salama al-Khafaji, a soft-spoken dentist who eludes assassins to become Iraq's most popular female politician; and Umm Hassane, Ciezadlo's sardonic Lebanese mother-in-law, who teaches her to cook rare family recipes--which are included in a mouthwatering appendix of Middle Eastern comfort food. As bombs destroy her new family's ancestral home and militias invade her Beirut neighborhood, Ciezadlo illuminates the human cost of war with an extraordinary ability to anchor the rhythms of daily life in a larger political and historical context. From forbidden Baghdad book clubs to the oldest recipes in the world, Ciezadlo takes us inside the Middle East at a historic moment when hope and fear collide. Day of Honey is a brave and compassionate portrait of civilian life during wartime--a moving testament to the power of love and generosity to transcend the misery of war.

"Her epicurial tour cracks open a different Iraq. She looks into its dusty cookbooks, explores its coffeehouses and savors the foods of its many regions and religious sects. Her book is full of more insight and joy than anything else I have read on Iraq.... Her writing is at times so moving that you want to cry for countries destroyed, but she writes with such wisdom that you don't fret over the future of these 4,000-year-old civilizations."--The Washington Post Book World

"In her extraordinary debut, Annia Ciezadlo turns food into a language, a set of signs and connections, that helps tie together a complex moving memoir of the Middle East. She interweaves her private story with portraits of memorable individuals she comes to know along the way, and with the shattering public events in Baghdad and Beirut. She does so with grace and skill, without falling into sentimentality or simple generalizations." --The Globe and Mail

"Ciezadlo is a splendid narrator, warm and funny and more interested in others than herself... Cooking and eating are everyday comforts, and with any luck, a source of fellowship; Day of Honey is a beautiful reminder that this doesn't change even in the midst of war."--Slate
"Ciezadlo's memoir is, fortunately, fascinating. And touching. Plus alternately depressing (because of the seemingly endless, senseless sectarian deaths in Iraq and Lebanon) and laugh-out-loud funny (because of the self-deprecation, not to mention the vivid portraits of unique characters such as her mother-in-law).... It would be an easy path, and maybe a wise one, to fill out the remainder of this review with direct quotations from the memoir. Ciezadlo's writing is that good.... Ciezadlo's voice is marvelous."--The Christian Science Monitor
"Ciezadlo paints memorable portraits of shopkeepers, journalists, poets, women's rights activists, restaurant owners, and the ways they cope... When Ciezadlo describes meals, I am both hungry and drunk on her words... The best books transport us to worlds outside our experience, making them both real and comprehensible. Unequivocally, this is one of those books." --The Austin Chronicle
"Her book is among the least political, and most intimate and valuable, to have come out of the Iraq war... There are many good reasons to read Day of Honey. It's a carefully researched tour through the history of Middle Eastern food. It's filled with adrenalized scenes from war zones, scenes of narrow escapes and clandestine phone calls and frightening cultural misunderstandings. Ms. Ciezadlo is completely hilarious on the topic of trying to please her demanding new Lebanese in-laws. These things wouldn't matter much, though, if her sentences didn't make such a sensual, smart, wired-up sound on the page.... Ms. Ciezadlo is the kind of thinker who listens as well as she writes. Her quotations from other people are often beautiful, or very funny.... readers will feel lucky to find her."--Dwight Garner, The New York Times

"Her writing about food is both evocative and loving; this is a woman who clearly enjoys a meal. . . . A glass of Iraqi tea, under Ciezadlo's gaze, is a thing of beauty."--The Associated Press

"Her fast-paced, graceful writing weaves politics into discussions of literature and cuisine to bring insight into the long history of cultural mix and transition in the Middle East, reminding us that even as war persists, our humanity helps to preserve our civilization, and our food binds our communities and our families.... A highly recommended personal perspective on political and cultural aspects of the war-riven Middle East..." --Library Journal
"Ciezadlo's lovely, natural language succeeds where news reports often fail: She leads us to care."--The Oregonian
"A vividly written memoir of her adventures in travel and taste in the Middle East. The capstone to all her thoughtful ruminations is a mouthwatering final chapter collecting many of the dishes she describes earlier in the book. She does this all in writing that is forthright and evocative, and she reminds us that the best memoirs are kaleidoscopes that blend an author's life and larger truths to make a sparkling whole."--Booklist (starred review)
"Annia Ciezadlo's Day of Honey is a gorgeous, mouthwateringly written book that convincingly demonstrates why, even with bombs going off all over the place, you gotta eat."
--Suketu Mehta, author of Maximum City
"A riveting, insightful and moving story of a spirited people in wartime horror told with affection and humour. Food plays a part in the telling--unraveling layers of culture, history and civilization, revealing codes of behaviour and feelings of identity and making the book a banquet to be savored."
--Claudia Roden, author of The New Book of Middle Eastern Food
"A warm, hilarious, terrifying, thrilling, insanely smart debut book that gets deep inside of you and lets you see the Middle East--and the world--through profoundly humanitarian eyes. And if that weren't enough, there's also a phenomenal chapter's worth of recipes. Buy this important book. Now."
--James Oseland, editor-in-chief, Saveur
"Annia Ciezadlo combines 'mouthwatering' and the Middle East in this beautifully crafted memoir. She adds a new perspective to the region and leavens the stories of lives caught up in the tragedies of war, including her own, with recipes for understanding. She is a gifted writer and a perceptive analyst. Ciezadlo's portraits are unforgettable."
--Deborah Amos, author of Eclipse of the Sunnis: Power, Exile, and Upheaval in the Middle East and correspondent for National Public Radio
"It's been a long time since I have enjoyed any nonfiction as much as I did Annia Ciezadlo's Day of Honey... Ciezadlo's determination to know intimately the cuisine of wherever she's staying lends the book both its organization and richness... Ciezadlo is a splendid narrator, warm and funny... Cooking and eating are everyday comforts, and with any luck, a source of fellowship; Day of Honey was a beautiful reminder that this doesn't change even in the midst of war."
--Slate
"Her book is full of more insight and joy than anything else I have read on Iraq. Some tidbits are fascinating... Ciezadlo is a wonderful traveling companion. Her observations are delightful -- witty, intelligent and nonjudgmental. Skirting the politics, hotel food and headline-grabbing violence, she spills the secrets of this region so rich in history as if they were spices from a burlap sack. Her writing is at times so moving that you want to cry for countries destroyed, but she writes with such wisdom that you don't fret over the future of these 4,000-year-old civilizations. It's a shame that the hundreds of journalists, aid workers and pundits who dominate the discussion of Iraq and Lebanon rarely stop to delight in the countries' beauty."
--The Washington Post

Annia Ciezadlo received her M.A. in journalism from New York University in 2000. In late 2003, she left New York for Baghdad, where she worked for The Christian Science Monitor. She has also written about culture, politics, and the Middle East for The New Republic, The Nation, The Washington Post, the National Journal, The Christian Science Monitor, The New York Observer, and Lebanon's Daily Star. Annia lives somewhere between New York and Beirut, with her husband, the journalist Mohamad Bazzi.

GOR007930888
Day of Honey by Annia Ciezadlo
Annia Ciezadlo
Used - Very Good
Paperback
Simon & Schuster
2011-02-15
304
1416583939
9781416583936
Winner of Books for a Better Life (First Book) 2011 Runner-up for Discover Great New Writers (Nonfiction) 2011 Runner-up for Dayton Literary Peace Prize (Nonfiction) 2012
Book picture is for illustrative purposes only, actual binding, cover or edition may vary.
This is a used book - there is no escaping the fact it has been read by someone else and it will show signs of wear and previous use. Overall we expect it to be in very good condition, but if you are not entirely satisfied please get in touch with us.