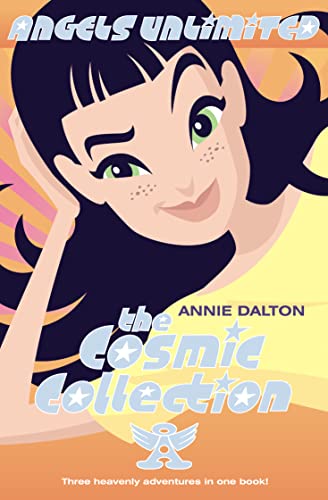 The Cosmic Collection
by Annie Dalton

Mel Beeby is back in her second bind-up! Three books in one comprising `Calling the Shots', `Fogging Over' and `Fighting Fit'.

Mel Beeby is back in her second bind-up! Three books in one comprising `Calling the Shots', `Fogging Over' and `Fighting Fit'.

Mel Beeby is the time-travelling angel who is growing in confidence which each new adventure. In `Calling the Shots', Mel travels to 1920s Hollywood and helps a family in trouble. In `Fogging Over', Mel and her mates go to Victorian London to help save a young lad from the terrors of his wicked uncle, and his sister from the streets where Jack the Ripper roams. In `Fighting Fit', Mel and Co go to Ancient Rome to reunite triplets, separated at birth. Scintillating time-travel with a thirteen-year-old angel with a divine wardrobe! Cosmic, or what?

Praise for LOSING THE PLOT:

"The book is a glossy package, the writing hip and current, but the story has integrity, substance and depth."
Guardian

Praise for WINGING IT from amazon.co.uk readers:

"I can't wait until the next ANGELS UNLIMITED book comes out!"

"The cover is really cool and so is the story!"

"This is such a lovely book. It is warm, funny, a great adventure story - and also full of insights about the problems around death and dying. It's a really original book - give it to all your friends!"

"The coolest book on earth!!!"

Annie Dalton has written many books, including the award-winning `The After Dark Princess' and the Carnegie Medal shortlist `The Real Tilly Beany'. She is the creator and author of the hugely successful `Angels Unlimited' series, which has been sold to several countries, including the USA, and which has been optioned as a film by Disney. Annie lives in Suffolk. She has three children, all of whom inspired the Angels series, and two grandchildren.

GOR000833583
The Cosmic Collection (Angels Unlimited) by Annie Dalton
Annie Dalton
Angels Unlimited
Used - Very Good
Hardback
HarperCollins Publishers
2004-05-04
496
0007166451
9780007166459
N/A
Book picture is for illustrative purposes only, actual binding, cover or edition may vary.
This is a used book - there is no escaping the fact it has been read by someone else and it will show signs of wear and previous use. Overall we expect it to be in very good condition, but if you are not entirely satisfied please get in touch with us.