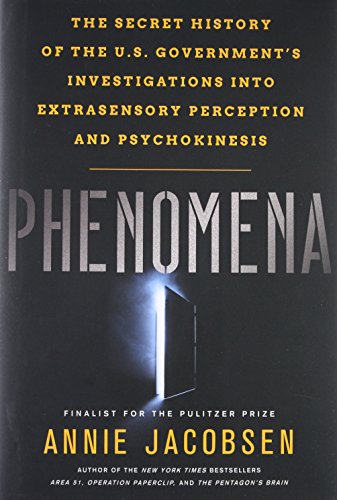 The definitive history of the military's decades-long investigation into boundary-pushing mental phenomena, from the author of the New York Times bestseller Area 51.

Phenomena: The Secret History of the U.S. Government's Investigations into Extrasensory Perception by Annie Jacobsen

For more than forty years, the U.S. government, through various military and intelligence agencies, has invested millions in classified programs that study the role of mental telepathy, clairvoyance, precognition and other forms of extrasensory perception (ESP) as a means of intelligence collection for military and defense purposes.

Now, for the first time, New York Times bestselling author Annie Jacobsen will tell the story of these programs, using interviews with the core group of individuals--including former Defense Department scientists, military officers, CIA analysts and researchers, an Apollo 14 astronaut, government psychics, and members of the Aviary--who ran these phenomena programs at the highest level of government.

PHENOMENA will be a quest narrative - a story about how far man will journey in search of improbable and mysterious things - with documentation showing which of these improbable things might actually exist.

Annie Jacobsen is the author of the New York Timesbestsellers Area 51 and Operation Paperclip and The Pentagon's Brain and was a contributing editor at the Los Angeles Times Magazine. A graduate of Princeton University, she lives in Los Angeles with her husband and two sons.
GOR010624051
9780316349369
0316349364
Phenomena: The Secret History of the U.S. Government's Investigations into Extrasensory Perception by Annie Jacobsen
Annie Jacobsen
Used - Very Good
Hardback
Little, Brown & Company
2017-03-30
544
N/A
Book picture is for illustrative purposes only, actual binding, cover or edition may vary.
This is a used book - there is no escaping the fact it has been read by someone else and it will show signs of wear and previous use. Overall we expect it to be in very good condition, but if you are not entirely satisfied please get in touch with us
Trustpilot