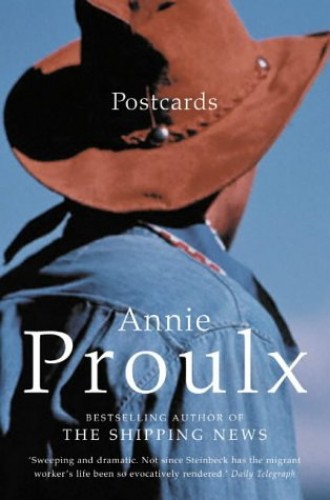 This is story of Loyal Blood, a man who spends a lifetime on the run from a crime so terrible that it renders him forever incapable of touching a woman.

This is story of Loyal Blood, a man who spends a lifetime on the run from a crime so terrible that it renders him forever incapable of touching a woman.

The odyssey begins on a freezing Vermont hillside in 1944 and propels Blood across the American West for forty years. Denied love and unable to settle, he lives a hundred different lives: mining gold, growing beans, hunting fossils, trapping, prospecting for uranium and ranching. His only contact with his past is through a series of postcards he sends home - not realising that in his absence disaster has befallen his family, and their deep-rooted connection with the land has been severed with devastating consequences...

`Postcards' was Annie Proulx's first novel, which received huge acclaim and marked the launch of an outstanding literary career. Her works include short story collections `Bad Dirt', `Close Range' (featuring `Brokeback Mountain') and novels such as `The Shipping News' and `Accordion Crimes'.

`The richness of America is portrayed with memorable effect in this remarkable first novel - Faulkner springs to mind. "Postcards" is written from the heart and - for its raspy dialogue, laconic humour and beautiful description of the natural world - deserves to be widely read.' Independent on Sunday

`A sweeping and dramatic tale. Not since Steinbeck has the migrant worker's life been so evocatively rendered.' Daily Telegraph

`A remarkable novel; poetic and yet driven by a strong narrative, tragic and yet scored with deep veins of humour. Loyal Blood is one of those rare, haunted characters who continue to live in the mind after you finish the book.' Literary Review

Annie Proulx published her first novel `Postcards' in 1991 at the age of 56. `The Shipping News' won the Pulitzer Prize for fiction, the National Book Award and the Irish Times International Prize. Her third novel, `Accordion Crimes', was published in 1996. She is also the author of three short-story collections, `Heart Songs' (1994), `Close Range' (1999) and `Bad Dirt' (2004). `Brokeback Mountain' was made into an Oscar-winning film in 2005. `Fine Just the Way It Is', her third collection of Wyoming short stories, was published in 2008.

GOR001220234
Postcards by Annie Proulx
Annie Proulx
Used - Very Good
Paperback
HarperCollins Publishers
2003-01-01
352
1841155012
9781841155012
N/A
Book picture is for illustrative purposes only, actual binding, cover or edition may vary.
This is a used book - there is no escaping the fact it has been read by someone else and it will show signs of wear and previous use. Overall we expect it to be in very good condition, but if you are not entirely satisfied please get in touch with us.