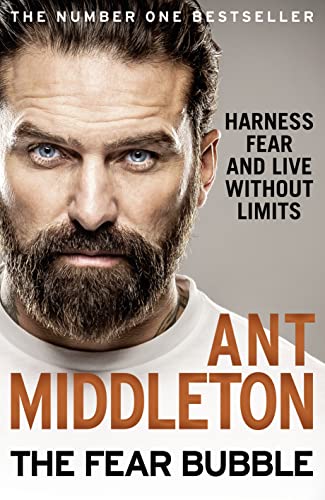 The Fear Bubble: Harness Fear and Live Without Limits
by Ant Middleton

The brilliant, inspirational next book by the author of the incredible No. 1 bestseller FIRST MAN IN.

The Fear Bubble: Harness Fear and Live Without Limits Summary

The Fear Bubble: Harness Fear and Live Without Limits by Ant Middleton

The brilliant, inspirational next book by the author of the incredible No. 1 bestseller FIRST MAN IN.

Ant Middleton is no stranger to fear: as a point man in the Special Forces, he confronted fear on a daily basis, never knowing what lay behind the next corner, or the next closed door. In prison, he was thrust into the unknown, cut off from friends and family, isolated with thoughts of failure and dread for his future. And at the top of Everest, in desperate, life-threatening conditions, he was forced to face up to his greatest fear, of leaving his wife and children without a husband and father.

But fear is not his enemy. It is the energy that propels him. Thanks to the revolutionary concept of the Fear Bubble, Ant has learned to harness the power of fear and understands the positive force that it can become. Fear gives Ant his edge, allowing him to seek out life's challenges, whether that is at home, pushing himself every day to be the best father he can be, or stuck in the death zone on top of the world in a 90mph blizzard.

In his groundbreaking new book, Ant Middleton thrillingly retells the story of his death-defying climb of Everest and reveals the concept of the Fear Bubble, showing how it can be used in our lives to help us break through our limits. Powerful, unflinching and an inspirational call to action, The Fear Bubble is essential reading for anyone who wants to push themselves further, harness their fears and conquer their own personal Everests.

The Fear Bubble: Harness Fear and Live Without Limits Reviews

Praise for First Man In:

'The best book of the year. First Man In will supercharge your life. Incredible' Tom Marcus, author of bestseller Soldier Spy

After thirteen years in the military, with four years as a Special Forces sniper, Ant Middleton is the epitome of what it takes to excel. He served in the SBS, the naval wing of the Special Forces, the Marines and 9 Parachute Squadron Royal Engineers, achieving what is known as the 'Holy Trinity' of the UK's Elite Forces.

Since leaving the military, he has become best known as the star of the international hit TV show SAS: Who Dares Wins.

His first book, First Man In, was a Number 1 bestseller, staying in the hardback charts for 33 weeks, and selling over 500,000 copies across all formats.

GOR010136018
The Fear Bubble: Harness Fear and Live Without Limits by Ant Middleton
Ant Middleton
Used - Like New
Hardback
HarperCollins Publishers
2019-09-05
352
0008194661
9780008194666
N/A
Book picture is for illustrative purposes only, actual binding, cover or edition may vary.
This is a used book - there is no escaping the fact it has been read by someone else and it will show signs of wear and previous use. Overall we expect it to be in very good condition, but if you are not entirely satisfied please get in touch with us.