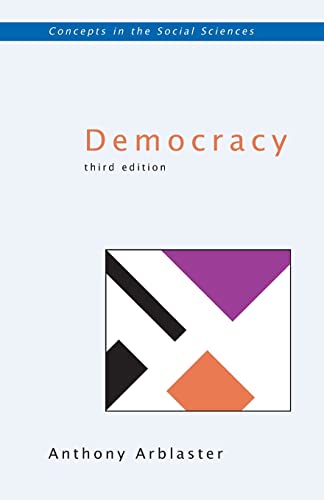 In Stock
$10.99
+10% GST
Looks at the history of both the theory and practice of democracy, and the fierce opposition it has often provoked. This book argues that democracy remains a relevant ideal and a challenge to much conventional political thinking, as well as to the centralizing tendencies of global power.
Very Good
Only 3 left

In praise of previous editions:

"...an ideal first book to place in the hands of a student embarking on the study of democracy." - Journal of Commonwealth and Comparative Politics

The revised and updated edition of this widely acclaimed survey takes account of the very different global context in which any discussion of democracy must now take place, including the mighty power of the multinationals vis-a-vis elected governments, the resurgence of the idea of an Islamic alternative to the Western democratic ideal, and the suggestion that unelected but powerful international bodies are effectively eroding the authority of the democratic state.

Anthony Arblaster looks first at the history of both the theory and practice of democracy, and the fierce opposition it has often provoked, showing how the representative version of democracy we are now familiar with was a relatively late arrival on the scene. He finds the core of the idea of democracy in the notion of popular power, and in the second part of the book he explores the meaning of this and the problems it involves.

Drawing on the classic writings of Rousseau, Paine and John Stuart Mill, he shows how wide the gap is between their vision of a fully democratic society and the limited realities of the Western democracies of today. Democracy, he argues, remains a relevant ideal and a challenge to much conventional political thinking, as well as to the centralizing tendencies of global power.

Anthony Arblaster recently retired as Reader in Politics at the University of Sheffield, where he had taught since 1970. He was previously a journalist on the staff of Tribune. He is the author of The Rise and Decline of Wesern Liberalism and Viva la Liberta!, a study of politics in opera.

GOR001965608
Democracy Third Edition by Anthony Arblaster
Anthony Arblaster
Used - Very Good
Paperback
Open University Press
2002-10-01
144
0335209696
9780335209699
N/A
Book picture is for illustrative purposes only, actual binding, cover or edition may vary.
This is a used book - there is no escaping the fact it has been read by someone else and it will show signs of wear and previous use. Overall we expect it to be in very good condition, but if you are not entirely satisfied please get in touch with us.