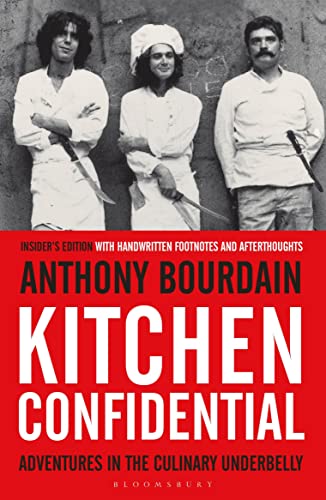 After twenty-five years of 'sex, drugs, bad behaviour and haute cuisine', chef and novelist Anthony Bourdain decided to tell all. From his first oyster in the Gironde to his lowly position as a dishwasher in a honky-tonk fish restaurant in Provincetown; from the kitchen of the Rainbow Room atop the Rockefeller Center to drug dealers in the East Village, from Tokyo to Paris and back to New York again, Bourdain's tales of the kitchen are as passionate as they are unpredictable, as shocking as they are funny.

'A compelling book with its intriguing mix of clever writing and kitchen patois ... more horrifically gripping than a Stephen King novel' * Sunday Times *
'Fantastic: as lip-smackingly seductive as a bowl of fat chips and pungent aioli' * Daily Telegraph *
'Elizabeth David written by Quentin Tarantino' * A.A. Gill *
'Extraordinary ... written with a clarity and a clear-eyed wit to put the professional food-writing fraternity to shame' * Observer *

Anthony Bourdain was not only the bestselling author of Kitchen Confidential: Adventures in the Culinary Underbelly, he was also the author of the novels: Bone in the Throat, The Bobby Gold Stories and Gone Bamboo, his work appeared in the New York Times, the New Yorker and Food Arts magazine and he was the host of the international CNN television series Parts Unknown.

GOR004943185
Kitchen Confidential: Insider's Edition by Anthony Bourdain
Anthony Bourdain
Used - Very Good
Paperback
Bloomsbury Publishing PLC
2013-05-23
384
1408845040
9781408845042
N/A
Book picture is for illustrative purposes only, actual binding, cover or edition may vary.
This is a used book - there is no escaping the fact it has been read by someone else and it will show signs of wear and previous use. Overall we expect it to be in very good condition, but if you are not entirely satisfied please get in touch with us.