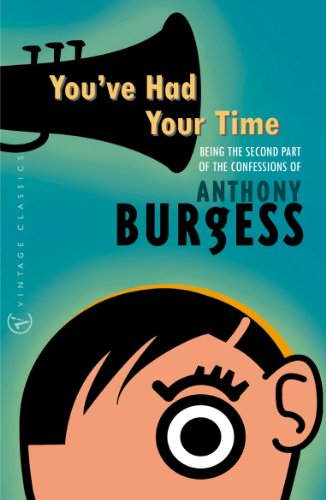 You've Had Your Time
by Anthony Burgess

In Stock
$14.49
+10% GST
After returning from a trip to Brunei, Anthony Burgess, initially believing he has only a year to live, begins to write - novels, film scripts, television series, articles.
Very Good Well Read
6 in stock

You've Had Your Time Summary

You've Had Your Time by Anthony Burgess

After returning from a trip to Brunei, Anthony Burgess, initially believing he has only a year to live, begins to write - novels, film scripts, television series, articles. It is the life of a man desperate to earn a living through the written word. He finds at first that writing brings little success, and later that success, and the obligations it brings, interfere with his writing - especially of fiction. There were vast Hollywood projects destined never to be made, novels the critics snarled at, journalism that scandalised the morally scrupulous. There is the eclat of A Clockwork Orange (and the consequent calls for Burgess to comment on violent atrocities), the huge success - after a long barren period - of Earthly Powers. There is a terrifying first marriage, his description of which is both painful and funny. His second marriage - and the discovery that he has a four-year-old son - changes his life dramatically, and he and Liana escape to the Mediterranean, for an increasingly European life. With this marriage comes the triumphant rebirth of sex, creative energy and travel - to America, to Australia and all over Europe.

You've Had Your Time Reviews

"Extraordinarily lively, amazingly zestful, gutsy, bawdy fun" * Sunday Express *
"This autobiography, packed with extraordinary moments... provides a unique picture of today's literary world. It also has the effect of pinning Burgess down, making him, improbable as he is, real and believable. We will, I think read him better for this, and appreciate him more" * Observer *
"What Burgess ''shows off'' in these pages is the vivid interest that a writer's life can hold when it is lived by a writer with a robust temperament, a showman's appetite for vulgarity and the kind of gargantuan, omnivorous learning that helps give polymathy a good name... You've Had Your Time is an exhilarating book which, like the best of Burgess's novels, fulfills the ancient obligations of delighting, instructing and moving with incomparable panache" * Independent *
"In two huge volumes of "confessions" Burgess wove a vast tapestry of his life. William Boyd, an admirer, said they were among the best novels that Burgess ever wrote" * Guardian *

Anthony Burgess was born in Manchester in 1917. He served in the army from 1940 to 1954 before becoming a colonial education officer. It was while he held this post that doctors told him he would die, and he decided to try to live by writing. A prolific and respected author, Burgess died in 1993.

GOR001660576
You've Had Your Time by Anthony Burgess
Anthony Burgess
Used - Very Good
Paperback
Vintage Publishing
2002-10-03
416
0099437066
9780099437062
N/A
Book picture is for illustrative purposes only, actual binding, cover or edition may vary.
This is a used book - there is no escaping the fact it has been read by someone else and it will show signs of wear and previous use. Overall we expect it to be in very good condition, but if you are not entirely satisfied please get in touch with us.