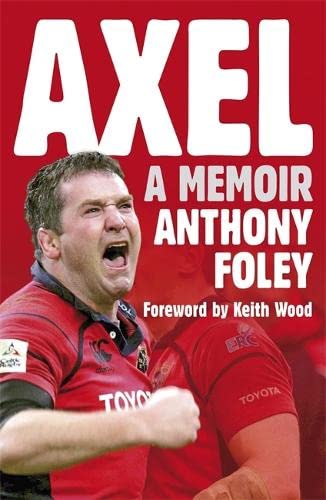 On 20 May 2006, Anthony Foley held aloft the European Cup for Munster and cemented his position as a legend of Irish rugby.

With a father who played for Munster and Ireland - and who was a member of the team that conquered the All Blacks - it was no surprise that the young Anthony took to the game and he has shone on every team he has played for - from the St Munchin's Junior Cup team to the Irish national side.

He was part of the Shannon side that dominated the 1990s, winning four All-Ireland league titles in a row and playing in all forty-eight games in that amazing record.

In a memorable debut for Ireland, he scored a try against England in 1995 and went on to gain over sixty caps and captain his country.

But it is with Munster - his true band of brothers - that Foley is most identified. He is the province's most capped player, holds the record for the most tries in all competitions and led them to glory in Europe.

In Axel, he looks back at a career of dizzying highs and sickening lows, at Ireland's often painful progression into the professional era and lets us in on what makes one of the last, great amateur players tick.

'Heart, honesty, determination and teamwork - words that sit comfortably on the shoulders of Anthony Foley.' * Keith Wood *
'Anthony Foley's story was always one that had to be told' * Sunday Independent *
'As honest and genuine as the man himself.' * Evening Echo *
'A highly personal, entertaining read.' * Munster Express *

Anthony Foley was born in 1973 and has become one of Munsters most-enduring and most-loved rugby players. He has captained his province and country and led Munster to European glory in 2006. He announced his retirement from the game in January 2008. He is married with two children and lives in County Clare.

GOR001297920
Axel by Anthony Foley
Anthony Foley
Used - Very Good
Paperback
Hachette Books Ireland
2009-04-09
288
0340977671
9780340977675
N/A
Book picture is for illustrative purposes only, actual binding, cover or edition may vary.
This is a used book - there is no escaping the fact it has been read by someone else and it will show signs of wear and previous use. Overall we expect it to be in very good condition, but if you are not entirely satisfied please get in touch with us.