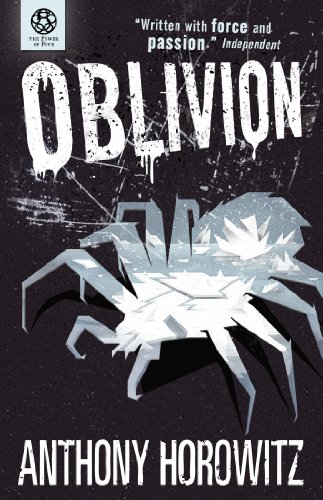 The Power of Five: Oblivion
by Anthony Horowitz

The Power of Five: Oblivion Summary

The Power of Five: Oblivion by Anthony Horowitz

The epic conclusion to the ever-popular supernatural series, by the number one bestselling author of Alex Rider. Having escaped from Hong Kong, the five gatekeepers - Matt, Pedro, Scott, Jamie and Scarlett - are lost in a hostile and dangerous world. As they struggle to re-group and plan their next move, the malevolent King of the Old Ones gathers his forces in Oblivion: a desolate landscape where the last survivors of humanity must fight the ultimate battle.

The Power of Five: Oblivion Reviews

Stands out in a series of accomplished thrillers * The Daily Telegraph *
Strong and moving * Jewish Chronicle *
An exciting and unforgettable end to one of the best teen sagas ever written * Bury Free Press *
The scale of the apocalypse is memorably conveyed with a wonderful sleight of hand. * Guardian *
It's exciting to see so big and bold a book being written for a young audience, who will find much here to think about, and much to enjoy. * Guardian *
Intelligent, complex and gripping, a fine end to a great series. * Daily Express *
Horowitz has outdone himself once more with Oblivion * Carousel *
Horowitz has outdone himself once more with Oblivion * Carousel *

Anthony Horowitz is the author of the number one bestselling Alex Rider books and The Power of Five series. He has enjoyed huge success as a writer for both children and adults, most recently with the latest adventure in the Alex Rider series, Russian Roulette and the highly acclaimed Sherlock Holmes novels, The House of Silk and Moriarty. Anthony was chosen by the Ian Fleming estate to write the new James Bond novel, Trigger Mortis, which will be published in September 2015. Anthony has won numerous awards, including the Bookseller Association/Nielsen Author of the Year Award, the Children's Book of the Year Award at the British Book Awards, and the Red House Children's Book Award. In 2014 Anthony was awarded an OBE for Services to Literature. He has also created and written many major television series, including Injustice, Collision and the award-winning Foyle's War.

GOR004869630
The Power of Five: Oblivion by Anthony Horowitz
Anthony Horowitz
Power of Five
Used - Very Good
Paperback
Walker Books Ltd
2013-07-04
672
1406327441
9781406327441
N/A
Book picture is for illustrative purposes only, actual binding, cover or edition may vary.
This is a used book - there is no escaping the fact it has been read by someone else and it will show signs of wear and previous use. Overall we expect it to be in very good condition, but if you are not entirely satisfied please get in touch with us.