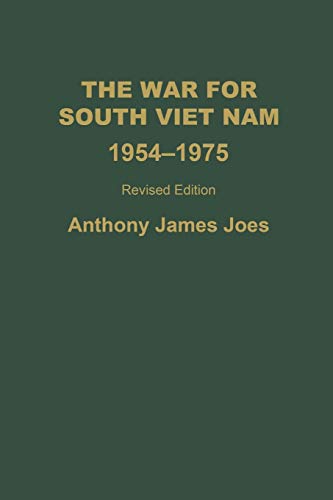 A chronicle and analysis of the 20-year struggle to maintain South Vietnamese independence. Anthony James Joes tells the story with a sympathetic focus on South Vietnam and is highly critical of US military strategy and tactics in fighting this war.

Like the widely praised original, this new edition is compact, clearly written, and accessible to the nonspecialist. First, the book chronicles and analyzes the twenty-year struggle to maintain South Vietnamese independence. Joes tells the story with a sympathetic focus on South Viet Nam and is highly critical of U.S. military strategy and tactics in fighting this war. He claims that the fall of South Viet Nam was not inevitable, that an abrupt and public termination of U.S. aid provoked a crisis of confidence inside South Viet Nam that led to the debacle. Students and scholars of military studies, South East Asia, U.S. foreign policy, or the general reader interested in this fascinating period in 20th century history, will find this new edition to be invaluable reading.

After discussing the principal American mistakes in the conflict, Joes outlines a workable alternative strategy that would have saved South Viet Nam while minimizing U.S. involvement and casualties. He documents the enormous sacrifices made by the South Vietnamese allies, who in proportion to population suffered forty times the casualties the Americans did. He concludes by linking the final conquest of South Viet Nam to an increased level of Soviet adventurism which resulted in the invasion of Afghanistan, the U.S. military build-up under Presidents Carter and Reagan, and the eventual collapse of the USSR. The complicated factors involved in the war are here offered in a consolidated, objective form, enabling the reader to consider the implications of U.S. experiences in South Viet Nam for future policy in other world areas.

ANTHONY JAMES JOES is Professor of Political Science and Director of the International Relations Program at Saint Joseph's University in Philadelphia./e He is the author or contributing editor of ten books, has published numerous articles in professional journals, and has traveled and lectured on four continents.

Preface: The Challenge of Viet Nam Viet Nam Before 1945 The Viet Minh The First Indochina War 1946-1954 After the Partition The Viet Cong Fighting Guerrillas The Overthrow of President Diem The ARVN from Dien Bien Phu to Tet The Great Tet Offensive Vietnamization: From the Parrot's Beak to the Easter Offensive The United States in Viet Nam: Some Reflections South Viet Nam on Its Own: 1973-1975 The Last Days of South Viet Nam Conclusion: Viet Nam and the Future Epilogue 2001: South Viet Nam's Defeat Revisited Selected Bibliography Index
NLS9780275968076
9780275968076
0275968073
The War for South Viet Nam, 1954-1975, 2nd Edition by Anthony J. Joes
Anthony J. Joes
New
Paperback
ABC-CLIO
2001-03-30
224
N/A
Book picture is for illustrative purposes only, actual binding, cover or edition may vary.
This is a new book - be the first to read this copy. With untouched pages and a perfect binding, your brand new copy is ready to be opened for the first time
Trustpilot