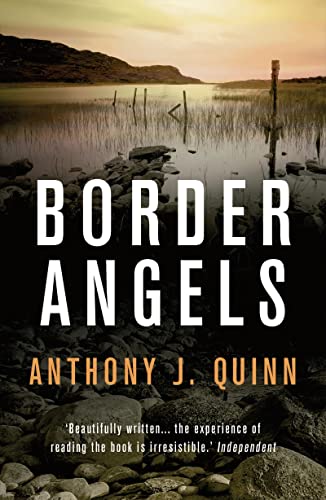 On the Irish border, Inspector Celcius Daly investigates human trafficking and a victim to whom there may be more than meets the eye.

A charred corpse and a set of footprints in the snow lead Celcius Daly into the twilight world of people trafficking. Inspector Celcius Daly is hunting for a missing woman who disappeared one winter's night along the Irish border, leaving in her wake the corpses of two men.

Soon Daly is involved in a life-or-death chase, leading him deep into border country: a wild terrain of disappearing lanes and blown-up bridges, abandoned ghost-estates and thick forests - the ultimate refuge for anyone who does not want to be found.

'This should make Quinn a star, for it is unquestionably one of the crime novels of the year' Daily Mail.
'An edge-of-the-seat thriller ... beautifully written ... Outstanding' Irish Independent.
'Betrayal, Pathos, Compassion, Brutality ... As beautifully written as the wild ferocity of Lough Neagh' Ken Bruen.
'Quinn's pacy prose walks the fine line between a James Lee Burke-like melancholy and the sort of muscularity found in Michael Connelly's works. His characters hum with authenticity too. They're not always sympathetic but they're always intriguing ... a tense and unpredictable ride' The Sunday Herald.
'In a story that has as many twists and turns, dead ends, potholes and bumps as an unapproved border road, Quinn keeps masterly control of the of the narrative, which involves four different but interlocking hunts' The Belfast Telegraph.
'The truth gradually comes clear in this beautifully written novel. It reveals a frightening fact: the Troubles aren't over yet' Literary Review.
'A fast-moving story of crime and conspiracy ... Masterly' Irish Independent.
'Atmospheric prose that is deeply evocative of a particular landscape spells out Quinn's deep attachment to the countryside of his childhood ... This is indeed a twenty-first century crime story and an ingenious one. A new, important voice within Northern Irish crime writing' Eurocrime.
'Like many writers resident in Ireland, Anthony Quinn is influenced by the great American crime writers - and Border Angels shows that he clearly belongs in their august company' Good Book Guide.

Anthony J. Quinn was born in Northern Ireland's County Tyrone and studied English at Queen's University, Belfast. He works as a journalist and author. His first novel, DISAPPEARED, was published by Head of Zeus in 2014.

GOR007015757
Border Angels by Anthony J. Quinn
Anthony J. Quinn
Inspector Celcius Daly
Used - Very Good
Paperback
Head of Zeus
2015-08-13
352
1781858632
9781781858639
N/A
Book picture is for illustrative purposes only, actual binding, cover or edition may vary.
This is a used book - there is no escaping the fact it has been read by someone else and it will show signs of wear and previous use. Overall we expect it to be in very good condition, but if you are not entirely satisfied please get in touch with us.