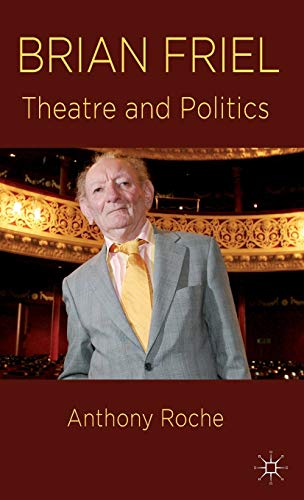 Out of Stock
$83.99
inc. GST
Friel is recognised as Ireland's leading playwright and due to the ability of plays like Translations and Dancing at Lughnasa to translate into other cultures he has made a major impact on world theatre. This study draws on the Friel Archive to deepen our understanding of how his plays were developed.
Well Read
Only 0 left

Friel is recognised as Ireland's leading playwright and due to the ability of plays like Translations and Dancing at Lughnasa to translate into other cultures he has made a major impact on world theatre. This study draws on the Friel Archive to deepen our understanding of how his plays were developed.

'Anthony Roche's Brian Friel: Theatre and Politics both heightens our appreciation of Friel's genius and, through its lucid prose and brilliant analyses of the plays, reveals that Friel has been fortunate in the masterful critics who have been drawn to his work.' -Richard Rankin Russell, Modern Drama

'Tony Roche has contributed so much to contemporary understanding of Irish drama and theatre, and this volume adds substantially to these contributions. For scholars of Irish letters, reading Brian Friel: Theatre and Politics will become both an immense pleasure and a necessity.' - Stephen Watt, Professor of English and Associate Dean for Undergraduate Education, Indiana University, USA

'Rare among contemporary academics, Roche's writing is as readable as it is incisive...For years to come, this remarkable study by Anthony Roche will be a must for any producer, director, dramaturg, teacher or lover of Irish theater who would truly understand and honor Friel's genius.' - James W. Flannery, Irish America

'Anthony Roche has impeccable credentials as a critic of contemporary Irish theatre and of Brian Friel's work in particular This is a book crammed with information, much of it new and intriguing.' Christina Hunt Mahoney, Irish Times

'Roche's frequent and skillful analysis of direction, casting and setting will be refreshing reading for many, and in this respect the book is nothing less than groundbreaking this is a carefully argued, insightful, and theoretically informed book ' - Scott Boltwood, Irish University Review

'Anthony Roche's new study provides both an introduction to the author he rightly terms "Ireland's leading contemporary playwright," and a nuanced examination that will expand the understandings of readers and theatergoers already familiar with Friel...Anyone interested in Irish drama will be tremendously grateful for Bryan Friel: Theatre and Politics.' - Helen Lojek, New Hibernia Review

ANTHONY ROCHE is an Associate Professor and Head of Subject for Drama Studies in the School of English, Drama and Film at University College Dublin, Republic of Ireland. Recent publications include The Cambridge Companion to Brian Friel (2006) and a revised and expanded second edition of his Contemporary Irish Drama (Palgrave Macmillan, 2009).

AcknowledgementsIntroduction Escaping Containment: The Early Plays Friel and the Director: Tyrone Guthrie and Hilton Edwards Fantasy in Friel Brian Friel and Contemporary British Drama: The Missing Dimension The Politics of Space: Friel's Drama of the 1970s Translations: 'An Inquiry into the Disappearance of Lt George Yolland' Memory and History Negotiating the Present Conclusion Notes Bibliography Index

GOR010393591
Brian Friel: Theatre and Politics by Anthony Roche
Anthony Roche
Used - Well Read
Hardback
Palgrave Macmillan
2011-05-25
235
0230576478
9780230576476
N/A
Book picture is for illustrative purposes only, actual binding, cover or edition may vary.
This is a used book. We do our best to provide good quality books for you to read, but there is no escaping the fact that it has been owned and read by someone else previously. Therefore it will show signs of wear and may be an ex library book.