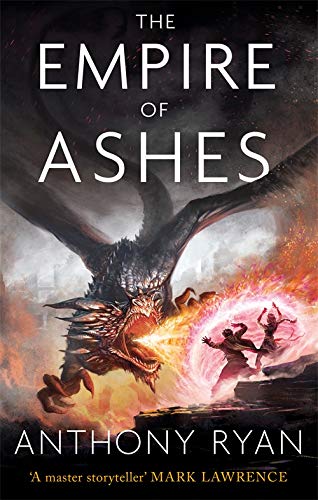 The Empire of Ashes
by Anthony Ryan

Used Price
$23.49
inc. GST
Free Shipping in Australia
The Empire of Ashes is the action-packed conclusion to the Draconis Memoria series - an enthralling epic fantasy of magic, adventure and the furious battle to forge an empire, from international bestselling author Anthony Ryan
Reviews:
Trustpilot
Like New

The Empire of Ashes Summary

The Empire of Ashes: Book Three of Draconis Memoria by Anthony Ryan

'Fabulous . . . Sure to be another fantasy classic' Huffington Post UK

The White Drake's army has cut a bloody swathe across the world, leaving nothing but ash in its wake. Thousands of innocents have died beneath its blades and countless more will surely follow.

Only small-time criminal Claydon Torcreek and master spy Lizanne Lethridge - along with their ragtag band of allies - stand between the white drake's fury and the world's end.

To save the future, they must delve into the past - and unravel a timeless mystery that might just turn the tide once and for all.

Armies will clash and ancient secrets will be revealed in The Empire of Ashes, the thrilling conclusion to Anthony Ryan's Draconis Memoria series.

'A marvellous piece of imagination with plenty of twists, a refreshingly different setting, and excellent world-building' Mark Lawrence

Customer Reviews - The Empire of Ashes

The Empire of Ashes Reviews

Ryan skillfully navigates multiple narrators to unveil a world steeped in magic and on the brink of destruction. Both the characters and the setting are irresistible right through to the end * Publishers Weekly *
The series is action packed, full of intrigue, and just plain fun. Ryan deftly writes something for fans of dragons, steampunk, or gutsy characters (or all three). Readers of epic adventure fantasies like Game of Thrones should check this series out * Booklist *

Anthony Ryan lives in London and is the New York Times bestselling author of the Raven's Shadow and Draconis Memoria series. He previously worked in a variety of roles for the UK government, but now writes full time. His interests include art, science and the unending quest for the perfect pint of real ale.

GOR009721360
The Empire of Ashes: Book Three of Draconis Memoria by Anthony Ryan
Anthony Ryan
The Draconis Memoria
Used - Like New
Paperback
Little, Brown Book Group
2019-02-07
656
0356506479
9780356506470
N/A
Book picture is for illustrative purposes only, actual binding, cover or edition may vary.
The book has been read, but looks new. The book cover has no visible wear, and the dust jacket is included if applicable. No missing or damaged pages, no tears, possible very minimal creasing, no underlining or highlighting of text, and no writing in the margins.