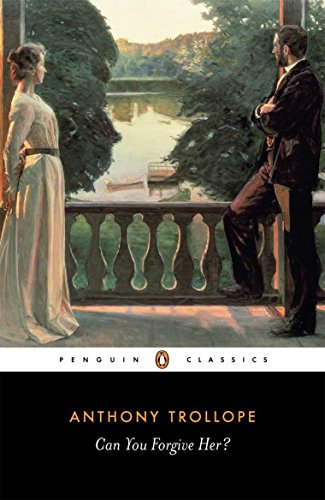 Alice Vavasor cannot decide whether to marry her ambitious but violent cousin George or the upright and gentlemanly John Grey - and finds herself accepting and rejecting each of them in turn.

The first novel in Anthony Trollope's 'Palliser' series, Can You Forgive Her? traces the fortunes of three very different women in an exploration of whether social obligations and personal happiness can ever coincide. This Penguin Classics edition is edited with an introduction by Stephen Wall.

Alice Vavasor cannot decide whether to marry her ambitious but violent cousin George or the upright and gentlemanly John Grey - and finds herself accepting and rejecting each of them in turn. Increasingly confused about her own feelings and unable to forgive herself for such vacillation, her situation is contrasted with that of her friend Lady Glencora - forced to marry the rising politician Plantagenet Palliser in order to prevent the worthless Burgo Fitzgerald from wasting her vast fortune. In asking his readers to pardon Alice for her transgression of the Victorian moral code, Trollope created a telling and wide-ranging account of the social world of his day.

In his introduction, Stephen Wall examines Trollope's skill in depicting the strengths and weaknesses of his characters, their behaviour and inner lives. This edition also includes notes and a bibliography.

If you enjoyed Can You Forgive Her?, you might enjoy Henry James's The Ambassadors, also available in Penguin Classics.

Anthony Trollope (1815-82) was one of the most widely enjoyed and prolific novelists of the nineteenth century. His books include the great Chronicles of Barsetshire, of which Barchester Towers is the second volume. Trollope worked for the Post Office for much of his adult life, combining postal and literary business as he travelled around the British Empire. He has been credited with the creation of the distinctive British pillar box.
GOR001203909
Can You Forgive Her? by Anthony Trollope
Anthony Trollope
Used - Very Good
Paperback
Penguin Books Ltd
1972-10-26
864
0140430865
9780140430868
N/A
Book picture is for illustrative purposes only, actual binding, cover or edition may vary.
This is a used book - there is no escaping the fact it has been read by someone else and it will show signs of wear and previous use. Overall we expect it to be in very good condition, but if you are not entirely satisfied please get in touch with us
Trustpilot