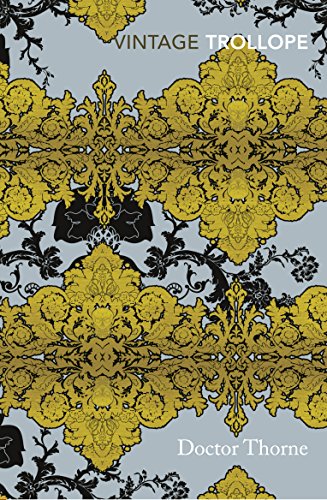 Used Price
$20.99
inc. GST
Free Shipping in Australia
Doctor Thorne was considered by Trollope to be the best of his works - a profound examination of the relationship between money and love, as it shifts away from the city of Barchester to a more rural setting. Frank's overbearing mother is against the match, insisting that Frank marry a wealthy heiress.
Very Good Good

Doctor Thorne was considered by Trollope to be the best of his works - a profound examination of the relationship between money and love, as it shifts away from the city of Barchester to a more rural setting. Frank Gresham is bankrupt and in love. Unfortunately, the woman he loves, Mary Thorne, is illegitimate and broke. Frank's overbearing mother is against the match, insisting that Frank marry a wealthy heiress. Meanwhile, Doctor Thorne, Mary's uncle, knows a secret that could change everything - Mary is about to inherit a considerable fortune. But he wants the young lovers to make their decision unburdened by the knowledge. Will Frank succumb to family pressure, or go with his heart?

"Literary wizardry and hilarious digs... Entertaining twists, flirtations, jiltigs, broken hearts... Wicked!" -- Val Hennessy * Daily Mail *
"Doctor Thorne has the best plot - seduction, murder, families ruined by drink and debt - and, in the eponymous doctor, the most sympathetic and human of all Trollope's heroes" * Guardian *
"One would be hard put to name a more enjoyable Victorian novelist than Anthony Trollope" * Washington Post *
"Why did Freud bother? This is so much better, and truer" * Daily Telegraph *
"There is wonderful comedy in Doctor Thorne... The book is a testament to Trollope's belief in decency as a guide to living, and I think we are made all the better for it." -- Julian Fellowes * Radio Times *

Anthony Trollope was born on 24 April 1815 and attended both Harrow and Winchester schools. His family were poor and eventually were forced to move to Belgium, where his father died. His mother, Frances Trollope, supported the family through writing. Trollope began a life-long career in the civil service with a position as a clerk in the General Post Office in London - he is also credited with later introducing the pillar box. He published his first novel, The Macdermots of Ballycloran in 1847, but his fourth novel, The Warden (1855) began the series of 'Barsetshire' novels for which he was to become best known. This series of five novels featuring interconnecting characters spanned twenty years of Trollope's career as a novelist, as did the 'Palliser' series. He wrong over 47 novels in total, as well as short stories, biographies, travel books and his own autobiography, which was published posthumously in 1883. Trollope resigned from the Post Office in 1867 and stood for Parliament as a Liberal, though he was not elected. He died on 6 December 1882.

GOR006992820
Doctor Thorne by Anthony Trollope
Anthony Trollope
Used - Very Good
Paperback
Vintage Publishing
2015-04-02
576
0099595893
9780099595892
N/A
Book picture is for illustrative purposes only, actual binding, cover or edition may vary.
This is a used book - there is no escaping the fact it has been read by someone else and it will show signs of wear and previous use. Overall we expect it to be in very good condition, but if you are not entirely satisfied please get in touch with us.