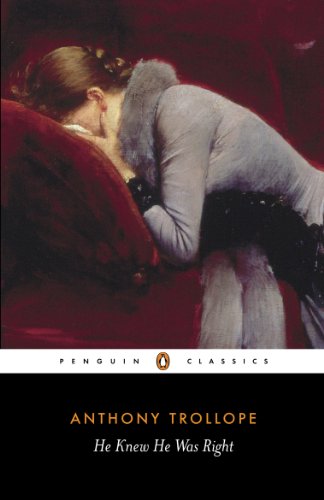 He Knew He Was Right
by Anthony Trollope

In Stock
$20.49
inc. GST
On a visit to the Mandarin Islands, Louis Trevelyan falls in love with Emily, the daughter of the governor, and they are swiftly married and return to live in London.
Very Good Good
Only 4 left

He Knew He Was Right Summary

He Knew He Was Right by Anthony Trollope

Anthony Trollope's story of one man's obsessive self-deception pitted against against the enduring power of his wife's love, He Knew He Was Right is edited with an introduction by Frank Kermode in Penguin Classics.

On a visit to the Mandarin Islands, Louis Trevelyan falls in love with Emily, the daughter of the governor, and they are swiftly married and return to live in London. But when a friend of Emily's father - the meddlesome libertine Colonel Osborne - starts paying rather too much attention to the young woman, Louis is consumed by jealousy and refuses to listen to his wife's pleas of innocence. And as his suspicions become increasingly obsessive and the marriage collapses, Louis finds himself driven to desperate actions. In He Knew He Was Right, Trollope created a highly sympathetic portrait of a deeply troubled marriage, and a compelling psychological story of sexual obsession in his portrait of a nineteenth-century Othello.

In his introduction, Frank Kermode discusses Victorian attitudes to courtship and marriage, compares the novel to Othello and places it in the context of Trollope's other works. This edition also includes a new chronology, a bibliography and notes.

If you enjoyed He Knew He Was Right, you might enjoy Trollope's The Way We Live Now, also available in Penguin Classics.

Anthony Trollope (1815-1882) was a prolific and popular novelist who simultaneously maintained a successful career as a civil servant in the Post Office. He wrote 47 novels during his life, the most famous of which are the six Chronicles of Barsetshire and the six 'Palliser' novels.

GOR000851609
He Knew He Was Right by Anthony Trollope
Anthony Trollope
Used - Very Good
Paperback
Penguin Books Ltd
1994-02-24
864
0140433910
9780140433913
N/A
Book picture is for illustrative purposes only, actual binding, cover or edition may vary.
This is a used book - there is no escaping the fact it has been read by someone else and it will show signs of wear and previous use. Overall we expect it to be in very good condition, but if you are not entirely satisfied please get in touch with us.