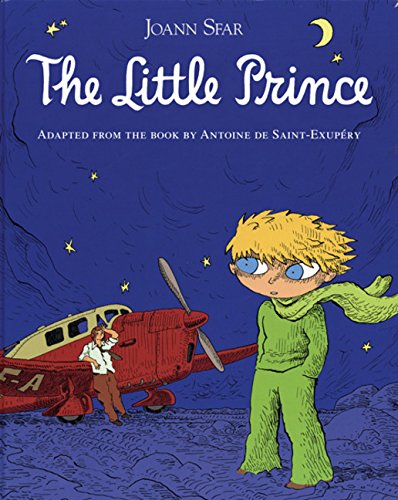 Used Price
$57.99
inc. GST
Free Shipping in Australia
Hand-chosen by Saint-Exupry's French publishers for his literary style and sensitivity to the original, Sfar has endeavored to recreate this beloved story, both honoring the original and stretching it to new heights.
Reviews:
Trustpilot
Like New Very Good

For over sixty-five years Antoine de Saint-Exupery's The Little Prince has captured the hearts and minds of its readers. The whimsical story with a fairy tale touch has sold over 80 million copies in 230 languages. This exciting graphic adaptation features beautiful, new artwork by Joann Sfar. Hand-chosen by Saint-Exupery's French publishers for his literary style and sensitivity to the original, Sfar has endeavored to recreate this beloved story, both honoring the original and stretching it to new heights. A vibrant, visual gift for longtime fans and those experiencing the story for the first time.

There is always the question of whether this story is best suited for children or adults, but legions of admirers prove that it sits in the rarified air of literature that works both ways. A worthy tribute that's most worthy of its own share of applause.--Booklist, starred review

The graphic novel's text conveys the wisdom of the original book, in which a childlike perspective illuminates the absurdity of adult living while attaining its own hard-won maturity. Sfar's loose but masterful art supplements the book's themes with a supple visual style that appears accessibly artless on its surface, but occasionally blossoms into symbolism and abstraction. The book abounds with individual panels that are profound in their meaning and striking in their simplicity.--Publishers Weekly, starred review

[Sfar's] adaptation is as classic as the original, and it will bring this quiet yet thought-provoking story to a new generation of readers. The format will be especially attractive to teens who might have missed this story when they were children, and to adults who are interested in revisiting their own childhood memories.--School Library Journal, starred review

This unique adaptation combines fable and social commentary, luring readers to consider stereotype, racism (in the account of the Turkish astronomer whose discovery of an asteroid was ignored by European scientists because of his Eastern culture), and respect for our environment. Those taking time to pore over the manga-influenced artwork will feel the Little Prince's frustration at the adults who refuse to take him seriously, the sorrow that comes from adults isolating themselves, and the joy of seeing the world through a child's imagination.-- VOYA

Praise for Le Petit Prince Graphic Novel, French Edition This life-long artist has chosen a simple layout to focus on the adventures of these two characters who share the dreams of millions of kids. Sfar keeps our childish dreams intact. --Ca Se Passe Comme Ca "Always prolific, always generous, always sensitive, Sfar has succeeded in giving life to the aviator and his Petit Prince. Any successful adaptation is a revelation. This is faithful to the text, but the aesthetics of Sfar...reveal the full dimension of melancholy and contemplation [in the story]. Sfar joins [Saint-Exupery]... 'a thousand miles from any human habitation'... where only children can venture." --Lire Magazine
Praise for The Little Prince A lovely story...which covers a poetic, yearning philosophy--not the sort of fable that can be tacked down neatly at its four corners but rather reflections on what are real matters of consequence. --The New York Times Book Review Praise for The Little Prince (1993) An edition of Saint-Exupery's most famous work--a gentle fable of love and peace--contains a thoughtful assessment of the details of its composition...[T]he special allure of the work is still the naively sophisticated, heartwarming tale of the little prince and his small planet. --The Horn Book Praise for The Little Prince (2000 hardcover edition) "This new translation into 'modern' English brings a classic tale into sharper focus for today's teens without sacrificing the beauty and simplicity of the author's writing, and the 'restored' artwork has all the charm of the original drawings. What appears to be a simple tale of two lost souls-one, a pilot marooned in the desert next to his ditched plane; the other, a minuscule prince in self-imposed exile from an asteroid so small that he can watch the sunset 44 times a day-reveals itself as something far more complex. What appears to be a fairy tale for children opens like the petals of the Little Prince's flower into a fantasy that has lessons for all of us." --School Library Journal Praise for The Little Prince: Sixtieth-Anniversary Gift Edition "Always welcome is that charming visitor from another planet, Antoine de Saint-Exupery's The Little Prince...The fable remains as lyrically haunting as ever." --Publishers Weekly

ANTOINE DE SAINT-EXUPERY, the Winged Poet, was born in Lyon, France, in 1900. A pilot at twenty-six, he was a pioneer of commercial aviation and flew in the Spanish Civil War and World War II. His writings include The Little Prince, Wind, Sand and Stars, Night Flight, Southern Mail, and Airman's Odyssey. In 1944, while flying a reconnaissance mission for his French air squadron, he disappeared over the Mediterranean. Joann Sfar is a French comic artist and author of The Rabbi's Cat, Little Vampire Goes to School (a New York Times best-seller), and the Eisner Award-winning Little Vampire Does Kung Fu! He was awarded the Rene Goscinny Award for young comics in 1998 and has continued to garner international critical praise. He was nominated for a 2007 Ignatz Award for Best Series. His original French edition of The Little Prince graphic novel was released in 2007.

GOR010714627
The Little Prince Graphic Novel by Antoine de Saint-Exupery
Antoine de Saint-Exupery
Little Prince
Used - Like New
Hardback
Cengage Learning, Inc
2010-10-18
112
0547338023
9780547338026
N/A
Book picture is for illustrative purposes only, actual binding, cover or edition may vary.
The book has been read, but looks new. The book cover has no visible wear, and the dust jacket is included if applicable. No missing or damaged pages, no tears, possible very minimal creasing, no underlining or highlighting of text, and no writing in the margins.