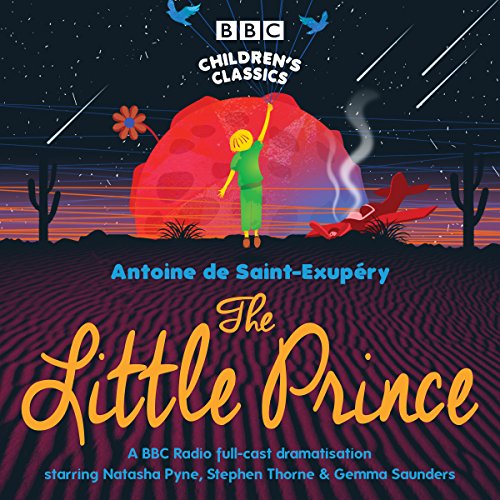 Robert Powell stars as the Aviator with Garrett Moore as the Little Prince and Bernard Cribbins as the King in this BBC Radio 4 full-cast dramatisation of Antoine de Saint-Exupery's popular fable.

Robert Powell stars as the Aviator with Garrett Moore as the Little Prince and Bernard Cribbins as the King in this BBC Radio 4 full-cast dramatisation of Antoine de Saint-Exupery's popular fable. This poignant dramatisation of the French classic was translated and dramatised by Bonnie Greer.

When he crashes in the Sahara Desert, the Aviator believes he is all alone - until he meets an unusual space traveller: a boy with golden hair who calls himself The Little Prince. As the Aviator repairs his plane, the Little Prince tells him fantastical tales about his amazing interplanetary journey. On his home planet, asteroid B-612, he fell in love with a beautiful rose, but left her to explore the universe. In the course of his travels, he has met people including a King, a drunkard and a lamplighter, as well as a snake and a wise fox - but now he must return home and be reunited with his rose...

A classic story about love, friendship and loss, The Little Prince is one of the most read books in the world. The wonder and excitement of much-loved children's classics lives on in BBC Radio's acclaimed full-cast dramatisations, complete with evocative music and sound effects. Duration: 1 hour approx.

Antoine Marie Jean-Baptiste Roger, comte de Saint-Exupery was born on 29 June 1900 in Lyon, France. He first flew in a plane when he was twelve years old, an experience which ignited a life-long love of aviation and adventure. After serving in the French air force, Saint-Exupery joined a pioneering aviation company and helped to establish the first airmail routes over north Africa and South America, surviving numerous accidents and gaining the Legion d'honneur for his service. His experiences inspired several books, including Night Flight (1931), and Wind, Sand and Stars (1939), which were awarded France's highest literary awards. He wrote The Little Prince during a sojourn in the US, where it was first published in 1943, before he returned to France to fly military reconnaissance missions. On 31 July 1944, Saint-Exupery took off from an air base in Corsica, but never returned. His disappearance remained the subject of speculation until 1998, when his identity bracelet was recovered from the sea off the coast of Marseille. Michael Morpurgo OBE is one of Britain's best loved children's authors. He was born in 1943 in St Albans and published his first book in 1975. Since then he has written over one hundred books, which have been translated into over twenty languages, and adapted for film and the stage, including the National Theatre's hit production of War Horse. His books have won the Whitbread Award, the Smarties Book Prize, the Children's Book Award and the Blue Peter Book Award as well as many others. Michael was Children's Laureate from 2003-2005, and was awarded an OBE in 2006. Robert Powell is known worldwide for his multi-award- winning portrayal of Jesus in Franco Zeffirelli's Jesus of Nazareth. His extensive stage, film and TV career includes Tom Stoppard's Jumpers, the title role in Ken Russell's Mahler, and Richard Hannay in the TV series of the same name as well as the feature film of The Thirty-nine Steps.

GOR009951923
The Little Prince by Antoine De Saint-Exupery
Antoine De Saint-Exupery
BBC Children's Classics
Used - Very Good
Hardback
BBC Audio, A Division Of Random House
2017-09-07
178529847X
9781785298479
N/A
Book picture is for illustrative purposes only, actual binding, cover or edition may vary.
This is a used book - there is no escaping the fact it has been read by someone else and it will show signs of wear and previous use. Overall we expect it to be in very good condition, but if you are not entirely satisfied please get in touch with us.