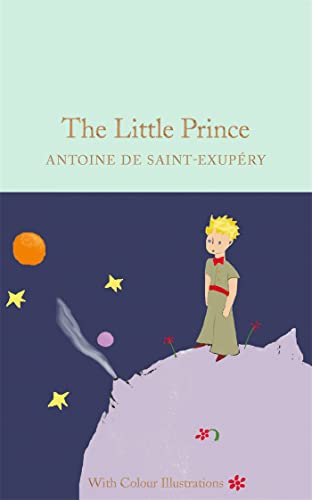 'The most beautiful things in the world cannot be seen or touched, they are felt with the heart.'

Part of the Macmillan Collector's Library; a series of stunning, clothbound, pocket sized classics with gold foiled edges and ribbon markers. These beautiful books make perfect gifts or a treat for any book lover. This edition features a specially commissioned translation by Ros and Chloe Schwarz, as well as the charming original illustrations by Saint-Exupery himself, coloured by Barbara Frith.

After crash-landing in the Sahara Desert, a pilot encounters a little prince who is visiting Earth from his own planet. Their strange and moving meeting illuminates for the aviator many of life's universal truths, as he comes to learn what it means to be human from a child who is not. Antoine de Saint-Exupery's delightful The Little Prince has been translated into over 180 languages and sold over 80 million copies.

Ever since its original publication in French in 1943, Antoine de Saint-Exupery's story has enchanted audiences of all ages . . . The story's wisdom on loneliness - in cities crowded with people - and consumerism - in a world replete with natural joys - remains as resonant as eve -- Samuel Earle * The Guardian *
Of all the books written in French over the past century, Antoine de Saint-Exupery's Le Petit Prince is surely the best loved in the most tongues -- Adam Gopnik * The New Yorker *
Every chapter in this book has a unique lesson; every encounter is an allegory. It is whimsical and magical . . . Saint-Exupery created a masterpiece that has lived in the hearts of adults and children for decades -- Farah Masud * The Daily Star *

Antoine de Saint-Exupery, born in Lyon 29 June 1900, was a French writer and aviator. In 1921 he began his military service and trained as a pilot, and at the outbreak of the Second World War he joined the French Air Force flying reconnaissance missions. Later, he joined the Free French Forces but while flying a mission in the Rhone valley on 31 July 1944 he disappeared and was never seen again. It was assumed that he was shot down over the Mediterranean. An unidentifiable body wearing French colours was found several days later and buried in Carqueiranne that September.

GOR009394351
The Little Prince: Colour Illustrations by Antoine de Saint-Exupery
Antoine de Saint-Exupery
Macmillan Collector's Library
Used - Very Good
Hardback
Pan Macmillan
2016-07-12
136
1909621552
9781909621558
N/A
Book picture is for illustrative purposes only, actual binding, cover or edition may vary.
This is a used book - there is no escaping the fact it has been read by someone else and it will show signs of wear and previous use. Overall we expect it to be in very good condition, but if you are not entirely satisfied please get in touch with us.