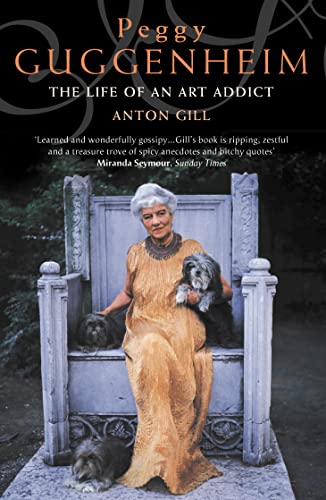 The wayward life (1898-1979) of the voracious art collector and great female patron of world-famous artists.

Peggy Guggenheim: The Life of an Art Addict by Anton Gill

The wayward life (1898-1979) of the voracious art collector and great female patron of world-famous artists.

`Mrs Guggenheim, how many husbands have you had?' `Do you mean my own, or other people's?' Peggy Guggenheim was an American millionairess art collector and legendary lover, whose father died on the Titanic returning from installing the lift machinery in the Eiffel Tower. She lived in Paris in the 1930s and got to know all the major artists - especially the Surrealists. (Later she bullied Max Ernst into marrying her, but was snubbed by Picasso.) When the Second World War broke out, she bought great numbers of paintings from artists fleeing to America; as a Jew she escaped from Vichy France and set up in New York, where in the 1940s and 50s she befriended and encouraged the New York School (Jackson Pollock, Rothko, etc.)

Her emotional life was in constant turmoil - a life of booze, bed and bohemia (mostly rich bohemia). Her favourite husband was a drunken English dilettante writer called Lawrence Vail, but she bedded many others, including Samuel Beckett. Later she moved to Venice, where her memory is enshrined in the world-famous palazzo that houses her Guggenheim Collection.

Anton Gill has written several plays and features for radio and television, novels and many distinguished works of non-fiction, including THE JOURNEY BACK FROM HELL: Conversations with Concentration Camp Survivors, which won the H.H. Wingate Prize in 1988 and is still in print as a HarperCollins paperback; BERLIN TO BUCHAREST (HC); AN HONOURABLE DEFEAT: A HISTORY OF THE GERMAN RESISTANCE TO HITLER; and THE DEVIL'S MARINER: A BIOGRAPHY OF WILLIAM DAMPIER.

GOR001659033
Peggy Guggenheim: The Life of an Art Addict by Anton Gill
Anton Gill
Used - Very Good
Paperback
HarperCollins Publishers
2002-10-07
552
0006531350
9780006531357
N/A
Book picture is for illustrative purposes only, actual binding, cover or edition may vary.
This is a used book - there is no escaping the fact it has been read by someone else and it will show signs of wear and previous use. Overall we expect it to be in very good condition, but if you are not entirely satisfied please get in touch with us.