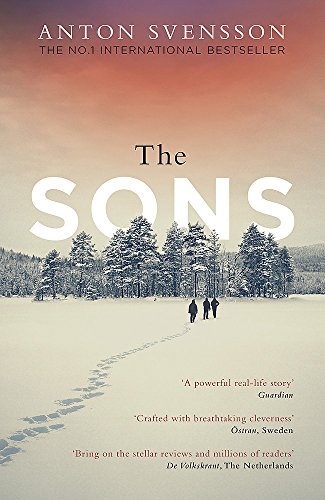 The Sons
by Anton Svensson

In Stock
$39.99
inc. GST
In the second part of the highly acclaimed and internationally bestselling series Made in Sweden, one brother fictionalises the real crimes of his own family for a remarkable and epic novel.
Very Good
Only 2 left

The Sons: The completely thrilling follow-up to crime bestseller The Father by Anton Svensson

'Unique and stunning. One of the most powerful novels you'll read this year'
Stephen Booth on The Father

In the second part of the highly acclaimed and internationally bestselling series Made in Sweden, one brother fictionalises the real crimes of his own family for a remarkable and epic novel.

After six years in prison, Sweden's most notorious criminal Leo Duvnjac is free, acquitted of all but two of the ten bank robberies he and his two younger brothers pulled off.

While behind bars, he befriended Sam Larsen, who was convicted of murdering his own father - and also happens to be the brother of the cop who caught Leo, Detective John Broncks.

With Sam at his side, Leo seeks out his now-law-abiding brothers for one last job and a chance at redemption - or revenge. But Bronks is on to him, and Leo's father has other plans for his sons . . .

Now two sets of brothers will play out the tragic and thrilling destinies of childhoods built on heartbreaking betrayal.

This hard-as-nails Scandi noir thriller reeks of authenticity and is totally electrifying. * Irish Independent *
The novel is brimming with an excellent sense of timing and set-ups, heartbreaking empathy, and a ferocious inspiration that will give rise to the feeling of "we want more, more, and even more". * Dagbladet Holstebro, Denmark *
Three brothers' bonds are put to the ultimate test in this well-written and nerve-racking thriller. * Litteratursiden, Denmark *
A suspenseful and well-written psychological crime fiction novel. * DBC, Denmark *
A page-turner! * Aftonbladet, Sweden *
An extremely brutal and realistic novel, very well-written and with an intriguing plot. * Expressen, Sweden *
The Sons is more multifaceted than most novels in the crime fiction genre. * Goeteborgs-Posten, Sweden *
A tragedy reminiscent of The Godfather. * Dagens Nyheter, Sweden *
A current, important and immortal story. * Skanska Dagbladet, Sweden *
The author duo manages to both build up tension and create a gripping story about a couple of individuals who are struggling to adapt to everyday life. * Upsala Nya Tidning, Sweden *
A truly powerful and exciting thriller, but most of all it's a novel about brotherhood, loyalties and blood ties. * Smalandsposten, Sweden *
The author duo writes a dense and forceful prose that keeps the reader nailed to the short and chiseled chapters. It's relentlessly suspenseful and realistic. * Mariestads-Tidningen, Sweden *
The Sons is simply a page-turner where you want to get to the end and the resolution as quickly as possible. * OEstra Smaland, Sweden *
The line between police and criminal, right and wrong, and bad and good is unusually blurry, and it's precisely that which, together with the strong bonds of loyalty between the main characters in the novel, makes this thriller highly worth reading. * OEstgoeta Correspondenten, Sweden *
[The Sons] is intensely thrilling and thought-provoking at the same time. * OElandsbladet, Sweden *
The alternating narration, with its changes of tempo, is efficiently utilized in this story about masculinity, exploitation and revenge. Anders Roslund & Stefan Thunberg write stringently and engagingly. * DAST Magazine, Sweden *
Thanks to the authors' skill in changing things up and constructing convincing details for every story, the result feels original. Anton Svensson rises above the crowd in the Swedish and international thriller literature. * LitteraturMagazinet, Sweden *
Hard-boiled entertainment. * BTJ, Sweden *

'Anton Svensson' is a pseudonym for Stefan Thunberg and Anders Roslund.

Stefan Thunberg is one of Scandinavia's most celebrated screenwriters. His body of work spans popular TV series such as Henning Mankell's Wallander and Hakan Nesser's Van Veeteren as well as two of Sweden's biggest box office successes in recent years: Hamilton and Jagarna 2. While Thunberg achieved fame as a screenwriter, the rest of his family became infamous in an entirely different way: his father and brothers were Sweden's most notorious bank robbers, dubbed Militarligan (The Military Gang) by the media.

Anders Roslund is an award-winning investigative journalist and one of the most successful and critically acclaimed Scandinavian crime writers of our time. Roslund is part of the New York Times bestselling author duo Roslund & Hellstroem, who are recipients of many prestigious awards, including the CWA International Dagger, the Glass Key and the Swedish Academy of Crime Writers' Award, and who boast sales exceeding five million copies. Films and TV series based on Roslund & Hellstroem's novels are in the works, both in Hollywood and Europe.

GOR008862637
The Sons: The completely thrilling follow-up to crime bestseller The Father by Anton Svensson
Anton Svensson
Made in Sweden
Used - Very Good
Hardback
Little, Brown Book Group
2018-01-09
416
0751557773
9780751557770
N/A
Book picture is for illustrative purposes only, actual binding, cover or edition may vary.
This is a used book - there is no escaping the fact it has been read by someone else and it will show signs of wear and previous use. Overall we expect it to be in very good condition, but if you are not entirely satisfied please get in touch with us.