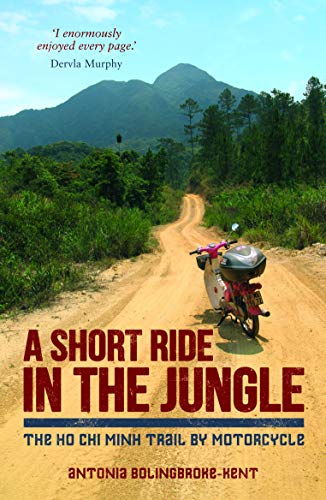 A Short Ride in the Jungle
by Antonia Bolingbroke-Kent

Antonia sets out on a solo hair-raising motorbike mission down the remnants of the legendary Ho Chi Minh Trail in Vietnam, Laos and Cambodia. Battling inhospitable terrain and multiple breakdowns, the story of her brave journey is thrilling and poignant: a unique insight into a little known face of Southeast Asia

A Short Ride in the Jungle Summary

A Short Ride in the Jungle: The Ho Chi Minh Trail by Motorcycle by Antonia Bolingbroke-Kent

'For the first time in my life I felt that death was a possibility; a stupid, pointless, lonely death on the aptly named Mondulkiri Death Highway.'

The Ho Chi Minh Trail is one of the greatest feats of military engineering in history. But since the end of the Vietnam War much of this vast transport network has been reclaimed by jungle, while remaining sections are littered with a deadly legacy of unexploded bombs. For Antonia, a veteran of ridiculous adventures in unfeasible vehicles, the chance to explore the Trail before it's lost forever was a personal challenge she couldn't ignore - yet it would sometimes be a terrifying journey.

Setting out from Hanoi on an ageing Honda Cub, she spent the next two months riding 2000 miles through the mountains and jungles of Vietnam, Laos and Cambodia. Battling inhospitable terrain and multiple breakdowns, her experiences ranged from the touching to the hilarious, meeting former American fighter pilots, tribal chiefs, illegal loggers and bomb disposal experts.

The story of her brave journey is thrilling and poignant: a unique insight into a little known face of Southeast Asia.

A Short Ride in the Jungle Reviews

Antonia Bolingbroke-Kent, a veteran of ridiculous adventures in unfeasible vehicles, is co-author of the successful Tuk-Tuk to the Road. Her articles have appeared in Wanderlust, The Guardian, Adventure Journal (USA), Verge (Canada) and Motorcycle Monthly, and she's also a regular speaker on the adventure travel circuit, speaking at the RGS, Adventure Travel Show and Wilderness Lectures.

GOR005952370
A Short Ride in the Jungle: The Ho Chi Minh Trail by Motorcycle by Antonia Bolingbroke-Kent
Antonia Bolingbroke-Kent
Used - Very Good
Paperback
Summersdale Publishers
2014-04-07
320
1849535434
9781849535434
N/A
Book picture is for illustrative purposes only, actual binding, cover or edition may vary.
This is a used book - there is no escaping the fact it has been read by someone else and it will show signs of wear and previous use. Overall we expect it to be in very good condition, but if you are not entirely satisfied please get in touch with us.