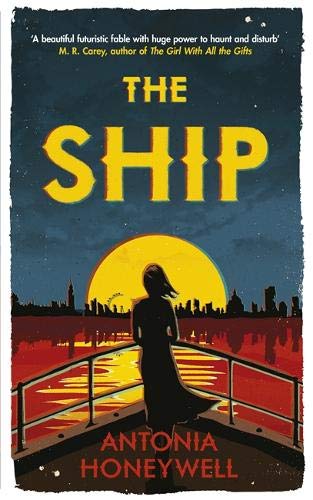 The Ship
by Antonia Honeywell

In Stock
$17.19
inc. GST
THE HUNGER GAMES meets THE HANDMAID'S TALE: a dystopian epic about love, friendship and what it means to be free. 'The Ship is tense, engaging and emotionally charged: I devoured this novel.' Helen Dunmore
Very Good
Only 2 left

The Ship by Antonia Honeywell

WELCOME TO LONDON
BUT NOT AS YOU KNOW IT

Oxford Street burned for three weeks. The British Museum is occupied by ragtag survivors. The Regent's Park camps have been bombed. The Nazareth Act has come into force. If you can't produce your identity card, you don't exist.

Lalla, sixteen, has grown up sheltered from the new reality by her visionary father, Michael Paul. But now the chaos has reached their doorstep. Michael has promised to save them. His escape route is a ship big enough to save five hundred people. But only the worthy will be chosen.

Once on board, as day follows identical day, Lalla's unease grows. Where are they going? What does her father really want?

WHAT IS THE PRICE OF SALVATION?

Honeywell's debut is ambitious and well written and provides endless possibilities for debate. * THE GUARDIAN *
The Hunger Games meets the London riots on board Noah's Ark 20 years from now, but don't underestimate its originality. Read it and be challenged. -- Fiona Wilson * THE TIMES *
Addictive and thought-provoking * ELLE *
As engrossing as it is chilling, this potent first novel fuses an apocalyptic coming-of-age story with a fierce interrogation of what it means to be truly alive -- Hepzibah Anderson * DAILY MAIL *
An ambitious debut that takes the tale of the Ark and updates it for a world bedevilled by global warming . . . will send shivers up your spine. -- Erica Wagner * HARPER'S BAZAAR *
A beautiful futuristic fable with huge power to haunt and disturb -- M. R. Carey, author of The Girl with All the Gifts
The Ship is tense, engaging and emotionally charged: I devoured this novel -- Helen Dunmore
An outstanding read from a strikingly original new talent. The Ship takes us on a luxury voyage into the future with a chosen elite - but the passengers don't know where they're going, and there's a dissenter on board. A brilliant, disturbing book that makes you question everything about the way we live now. -- Maggie Gee
It's haunted me since I finished it. * RICHARD EYRE *
'A hugely gripping depiction of a future world, The Ship is all the more chilling for its sense of authenticity. Honeywell has written a story that will make you question the value we place on love and freedom and what we'd be willing to sacrifice for those precious commodities ourselves. I couldn't put it down' -- Kerry Hudson, author of Thirst
A disturbing story from a bright new talent -- Salley Vickers
The Ship is a thought-provoking, claustrophobic novel. As I read, the world on the ship would shrink in on me, then suddenly expand to fill the horizon. I don't think I've read a novel that has had such an impact on me for a long time ... I defy anyone not to fall in love with this novel. * NORTHERN EDITORIAL *
Honeywell's writing is clean and crisp, with a strong voice and great sense of emotion and atmosphere ... This is a nugget of delight from an impressive first-time author * HOUSE OF BLOG *
A wonderfully enchanting novel, with a theme I found as thought-provoking as they come * REVIEWED THE BOOK *
The Ship is a wonderful first book - framing the utopian/dystopian genre in a coming of age story. It is both achingly sad and profoundly troubling * CLOUDBANKS & SHIMBLESHANKS *
Antonia Honeywell is an exciting new talent. The Ship is original and quite brilliant. * RANDOM THINGS THROUGH MY LETTERBOX *
I have not often come across books that are as powerful and thought-provoking as this * COSMOCHICKLITAN *
Above all, it's a story that has the power to stay with you, to ask questions beyond the last word * VANISREADING *
It's taut and full of suspense and keeps the reader guessing all the way through * VERITY READS BOOKS *
a great idea... some great touches * PRESS ASSOCIATION *
A thought-provoking novel that will without doubt spark debate. * CLOSER *
Honeywell makes no secret of her environmental concerns, but rather than coming across as preachy, it gives this coming-of-age tale a real punch. -- Jonathan Hatfull * SCIFINOW *
Topical and thought-provoking stuff * BIG ISSUE IN THE NORTH *
"a clever reframing of sci-fi's old 'happy dream or tough real life?' trope." * THE SUN *
Antonia Honeywell depicts a society brought to its knees by environmental carelessness and corporate greed. * THE INDEPENDENT *

Antonia Honeywell studied English at Manchester University and worked at the Natural History and Victoria and Albert Museums in London, running creative writing workshops and education programmes for children, before training as a teacher. During her ten years teaching English, drama and film studies, she wrote a musical, and a play which was performed at the Edinburgh Festival. She has four young children and lives in Buckinghamshire. The Ship is her first novel.

GOR006394117
The Ship by Antonia Honeywell
Antonia Honeywell
Used - Very Good
Hardback
Orion Publishing Co
2015-02-01
320
0297871498
9780297871491
N/A
Book picture is for illustrative purposes only, actual binding, cover or edition may vary.
This is a used book - there is no escaping the fact it has been read by someone else and it will show signs of wear and previous use. Overall we expect it to be in very good condition, but if you are not entirely satisfied please get in touch with us.