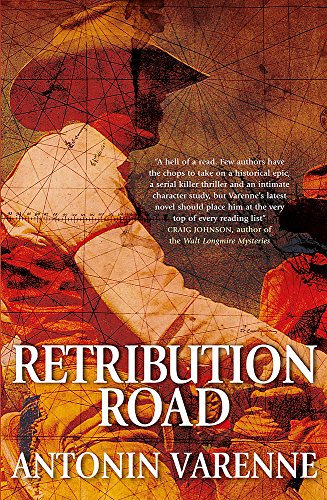 "We owe you our lives, Sergeant, but you are our worst nightmare . . ."

Burma, 1852. Sergeant Arthur Bowman, a sergeant in the East India Company, is sent on a secret mission during the Second Anglo-Burmese War. But the expedition is foiled - his men are captured and tortured. Throughout their ordeal, a single word becomes Bowman's mantra, a word that will stiffen their powers of endurance in the face of unimaginable suffering: "Survive". But for all that, only a handful escape with their lives.

Some years later in London, battling his ghosts through a haze of alcohol and opium, Bowman discovers a mutilated corpse in a sewer. The victim appears to have been subjected to the same torments as Bowman endured in the Burmese jungle. And the word "Survive" has been daubed in blood by the body's side. Persuaded that the culprit is one of the men who shared his captivity, Bowman resolves to hunt him down.

From the Burmese jungle to the slums of London to the conquest of the Wild West, Antonin Varenne takes us on a thrilling journey full of sound and unabated fury, reviving the lapsed tradition of the great writers of boundless adventure. Sergeant Bowman belongs to that breed of heroes who inhabit the imaginations of Conrad, Kipling, Stevenson . . . Lost soldiers who have plunged into the heart of darkness and will cross the globe in search of vengeance and redemption.

Translated from the French by Sam Taylor

A great adventure story . . . The excellent Three Thousand Horsepower bears the mark of Joseph Conrad and Robert Louis Stevenson . . . Antonin Varenne has dealt a masterstroke -- Francois Busnel * L'Express *
An adventure story, a crime novel, a war story and a western ... This book is a magnificent achievement -- Thomas Delecroix * Page *
A flamboyant adventure story ... a powerful novel that poses new questions about male violence * Livres Hebdo *
A literary firework: Antonin Varenne has written one of the most thrilling, most original books of the year -- Julien Bisson * Lire *
Unique, hair-raising, jam-packed, shocking, even unsettling, the excellent Three Thousand Horsepower is a new sensation -- Clementine Thiebault and Mikael Demets * Le Monde *
Antonin Varenne heralds the return of the great adventure novel. Magnificent -- Marie Rogatien * Figaro magazine *
Remarkable ... A novel that will haunt you long after you finish reading it -- R.R. * La Revue *
Antonin Varenne's Retribution Road is part Bernard Cornwell, part John le Carre and all of a hell of a read. Few authors have the chops to take on a historical epic, a serial killer thriller and an intimate character study but Varenne's latest novel should place him at the very top of every reading list. -- Craig Johnson, author of the Walt Longmire Mysteries
Antonin Varenne was awarded the Prix Michel Lebrun and the Grand Prix du Jury Sang d'encre for Bed of Nails, his first novel to be translated into English. His second, Loser's Corner was awarded the Prix des Lecteurs Quais du polar - 20 minutes and the Prix du Meilleur Polar Francophone.
GOR010959936
Retribution Road by Antonin Varenne
Antonin Varenne
Used - Like New
Paperback
Quercus Publishing
2017-02-09
528
0857053744
9780857053749
N/A
Book picture is for illustrative purposes only, actual binding, cover or edition may vary.
The book has been read, but looks new. The book cover has no visible wear, and the dust jacket is included if applicable. No missing or damaged pages, no tears, possible very minimal creasing, no underlining or highlighting of text, and no writing in the margins
Trustpilot