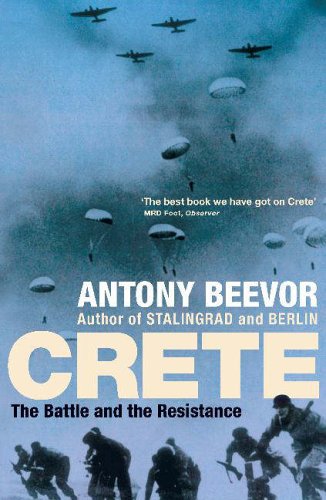 Crete: The Battle and the Resistance by Antony Beevor

'The best book we have got on Crete' Observer

The Germans expected their airborne attack on Crete in 1941 - a unique event in the history of warfare - to be a textbook victory based on tactical surprise. They had no idea that the British, using Ultra intercepts, knew their plans and had laid a carefully-planned trap. It should have been the first German defeat of the war, but a fatal misunderstanding turned the battle round. Nor did the conflict end there. Ferocious Cretan freedom fighters mounted a heroic resistance, aided by a dramatic cast of British officers from Special Operations Executive.

Antony Beevor's unerring flair for the climate and the feel of the conflict ... his insight and his grasp of these events make them seem as though they had happened last week * Patrick Leigh Fermor, Daily Telegraph *
Excellent . . . an arresting account of the whole war on Crete, including the ghastly experiences of the Cretans under German occupation * John Keegan, Sunday Telegraph *
The best book we have got on Crete * Michael Foot, Observer *
Beevor's account is excellent: fresh, lively and peppered with anecdotes * Mail on Sunday *
'A new paperback edition is welcome for two reasons; reminding us that Beevor is a writer and historian of rare ability and for starkly illustrating the variables of war' * Neville Smith, Lloyd's List *

A regular in the 11th Hussars, Antony Beevor served in Germany and England. He has had a number of books published and his book Stalingrad was awarded the Samuel Johnson Prize, the Wolfson History Prize and the Hawthornden Prize. Among the many prestigious posts he holds, he is a fellow of the Royal Society of Literature.

GOR001398167
Crete: The Battle and the Resistance by Antony Beevor
Antony Beevor
Used - Very Good
Paperback
John Murray Press
2005-09-12
432
0719568315
9780719568312
N/A
Book picture is for illustrative purposes only, actual binding, cover or edition may vary.
This is a used book - there is no escaping the fact it has been read by someone else and it will show signs of wear and previous use. Overall we expect it to be in very good condition, but if you are not entirely satisfied please get in touch with us.