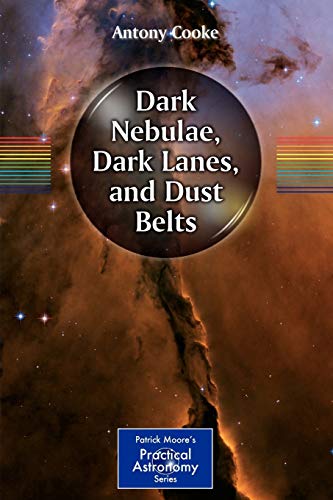 Dark Nebulae, Dark Lanes, and Dust Lanes explores those apparent dark regions in space that are among the most compelling telescopic destinations. This volume provides the optimal ways to observe each object in detail.

There are 'voids' obscuring all kinds of objects in the cosmos. Voids may be within an object, or between an object and us. Dark Nebulae, Dark Lanes, and Dust Lanes looks out into the deep sky at those apparent dark regions in space, which are among the most compelling telescopic destinations for amateur observers. One famous example is Barnard's dark nebulae - those striking dark clouds set against the background of stars in the Milky Way. But there are countless other less well known examples. These dark regions are often ignored altogether or commented upon only briefly in astronomy books, and it is all too easy to overlook the treasure trove they offer the observer.

Dark Nebulae, Dark Lanes, and Dust Lanes is a great source of practical information for observers. Such voids may be successfully observed using conventional observing methods, but they are often far better seen with technologies such as light-pollution filters, CCD video cameras, and image intensifiers. This book explains the optimal ways to observe each object in detail.

"In Dark Nebulae, Dark Lanes, and Dust Belts, Cooke describes a neglected area in the deep-sky observers' canon, the dark nebulae, and in addition he includes almost anything that may be perceived as dark in relation to deep-sky objects. ... The most likely beneficiaries of this book may well be the keen and more-advanced visual deep-sky observer who loves to chase features such as dark `lanes' in globular star clusters and the dusty areas of spiral galaxies ... ." (Nick Hewitt, The Observatory, Vol. 132 (1231), December, 2012)

"It is clear that Cooke ... has a passion for visually observing many dark areas of the universe. He clearly articulates this passion in his book and provides a wealth of observing challenges for observers with large amateur instruments. ... this reviewer, considers the scope of the book unique, so it would not have any competition in the campus library. Most of the black-and-white figures support the text. ... Overall, a useful resource. Summing Up: Recommended. General audiences and lower-and upper-division undergraduates." (J. R. Kraus, Choice, Vol. 50 (1), September, 2012)

Antony Cooke's passion for both astronomy and music was clear from an early age, although it was music that ultimately claimed his career. As solo cellist he has played and recorded worldwide. He was also a professor of music at Northwestern University in Chicago. Presently, he is a prominent Hollywood studio musician, as well as a composer for prime time television. However, it has often been said that science and music go hand in hang. With applied and theoretical astronomy never being far behind, he has pursued it as a serious avocation.

As an observer always looking for ways to improve his experience at the eyepiece, Cooke has constructed many telescopes over the years. Increasing apertures were always the hallmark of his often-quirky designs. Finding that the 18-inch aperture of his present telescope was still insufficient to deliver the kind of performance he had in mind, he experimented with newer technologies to bring these elusive goals ever closer. Successful viewing of dark objects requires great contrast. In this respect, some of the newer equipment has proven to be invaluable, enabling dramatic viewing of many dark objects and features in real time and without the need of CCD imaging.

Introduction. - The Nature of Unlit Gases and Dust, and their place in the Universe. - Observing Methods and Equipment. - Dark Lanes in Star Clusters. - Dark Lanes in Diffuse Nebulae.- Barnard's Dark Nebulae. - Galactic Dust Belts, and other Dark Regions. - Catalog and Guide. - Appendices.

GOR009831452
Dark Nebulae, Dark Lanes, and Dust Belts by Antony Cooke
Antony Cooke
The Patrick Moore Practical Astronomy Series
Used - Very Good
Paperback
Springer-Verlag New York Inc.
2012-01-26
243
1461411858
9781461411857
N/A
Book picture is for illustrative purposes only, actual binding, cover or edition may vary.
This is a used book - there is no escaping the fact it has been read by someone else and it will show signs of wear and previous use. Overall we expect it to be in very good condition, but if you are not entirely satisfied please get in touch with us.