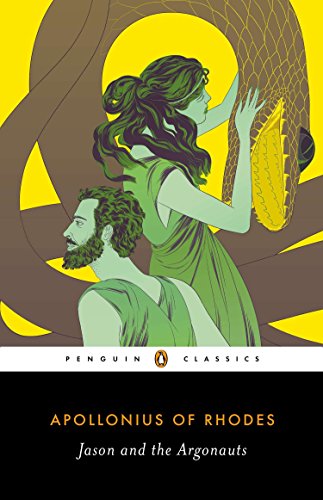 Jason and the Argonauts
by Apollonius of Rhodes

Jason and the Argonauts Summary

Jason and the Argonauts by Apollonius of Rhodes

Now in a riveting new verse translation Jason and the Argonauts (also known as the Argonautica), is the only surviving full account of Jason's voyage on the Argo in quest of the Golden Fleece aided by the sorceress princess Medea. Written in third century B.C., this epic story of one of the most beloved heroes of Greek mythology, with its combination of the fantastical and the real, its engagement with traditions of science, astronomy and medicine, winged heroes, and a magical vessel that speaks, is truly without exact parallel in classical or contemporary Greek literature and is now available in an accessible and engaging translation.

Apollonius of Rhodes published his first version of the Argonautica sometime in the middle of the third century B.C. At the end of his life he was director of the famous Library of Alexandria, which was the principal storehouse of all literature and learning at the time.

Aaron Poochigian, born in 1973, is a poet and an associated lecturer in Classics at The Ohio State University and has translated the Penguin Classics edition of Stung with Love: Poems and Fragments by Sappho, as well as works by Aeschylus and Aratus. He lives in New York City.

Benjamin Acosta-Hughes is Professor of Greek and Latin at The Ohio State University. He is the author of several works of nonfiction, including Arion's Lyre: Archaic Lyric into Hellenistic Poetry.

Jason and the Argonauts Reviews

"Consistently fascinating, an amalgam of the mythic and the modern with an occasion dash of Baron Munchausen or Marvel Comics."
--Michael Dirda, Washington Post Book World

"At every turn, Poochigian...improves on every English-language translation of the Argonautica that's come before him.

"Aaron Poochigian's new translation of Apollonius of Rhodes' Jason & the Argonauts demands to be read aloud--lines of perfect, unforced iambic pentameter make it as lyrical as Shelley or Frost."
--Smartish Pace

About Apollonius of Rhodes

Apollonius of Rhodes' fame rests solely on the Argonautica, the first version of which appeared sometime in the middle of the third century B.C. After a period spent on the island of Rhodes, he returned to his native Alexandria and became director of the famous library there.

Aaron Poochigian is a lecturer in Classics at The Ohio State University. He has translated Sappho, Aeschylus and Aratus, and his original poems have appeared in numerous journals.

Benjamin Acosta-Hughes is Professor of Greek and Latin at The Ohio State University.

GOR009703286
Jason and the Argonauts by Apollonius of Rhodes
Apollonius of Rhodes
Used - Very Good
Paperback
Penguin Books Ltd
2014-11-27
384
0143106864
9780143106869
N/A
Book picture is for illustrative purposes only, actual binding, cover or edition may vary.
This is a used book - there is no escaping the fact it has been read by someone else and it will show signs of wear and previous use. Overall we expect it to be in very good condition, but if you are not entirely satisfied please get in touch with us.