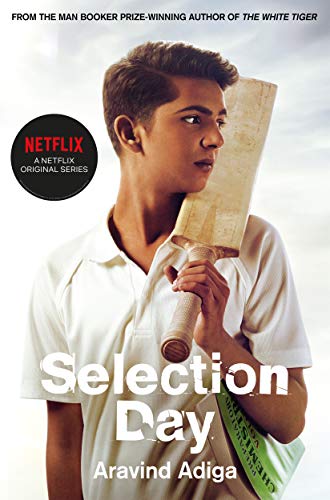 Used Price
$16.49
inc. GST
Free Shipping in Australia
A moving story of adolescence, ambition and self-realization: when a fourteen-year-old boy tries out for Mumbai's under-nineteen cricket team and meets his older brother's rival, everything in his world begins to change.
Reviews:
Trustpilot
Like New Good Well Read

Selection Day is a captivating, witty novel by the Man Booker Prize winning author of The White Tiger, Aravind Adiga.

Manjunath Kumar is fourteen. He knows he is good at cricket - if not as good as his elder brother Radha. He knows that he fears and resents his domineering and cricket-obsessed father, admires his brilliantly talented sibling and is fascinated by the world of CSI and by curious and interesting scientific facts. But there are many things, about himself and about the world, that he doesn't know . . . Sometimes it seems as though everyone around him has a clear idea of who Manju should be, except Manju himself.

When Manju begins to get to know Radha's great rival, a boy as privileged and confident as Manju is not, everything in Manju's world begins to change and he is faced with decisions that will challenge both his sense of self and of the world around him . . .

Selection Day is at its heart an engrossing and nuanced coming-of-age-novel . . . intriguing and subtly developed . . . [Adiga] has succeeded in composing a powerful individual story that, at the same time, does justice to life's (and India's) great indeterminacies. * Sunday Times *
[A] finely told, often moving, and intelligent novel . . . Adiga's novel takes in class, religion and sexuality - all issues that disrupt the dream of a sport that cares for nothing but talent and temperament. Because Adiga is a novelist, and one who has grown in his art since his Booker prizewinning debut, The White Tiger, he knows how to talk about all these matters through his characters and their compelling stories. -- Kamila Shamsie * Guardian *
[Adiga] has always been drawn to that gap between the glitter and gleam of India Shining and the violence, inequality and social misery that give a partial lie to the nation's desire to rebrand itself . . . [he] has written another snarling, witty state-of-the-nation address about a country in thrall to values that 19th-century moralists would have damned as "not cricket". * Observer *
Top-rate fiction from a young master . . . Gripping. * Times *
Selection Day is a captivating and sensitive coming-of-age story . . . Adiga's characters are getting more complex with each book, and this complexity makes his indictment of the contemporary world all the more urgent and convincing. -- Hirsh Sawhney * TLS *
Nobody can write with such dark wit about the story the social tumult of contemporary India like Aravind Adiga, who won the Booker prize for his 2008 debut, The White Tiger . . . Four years on, his characters' voices still jump off the page. * GQ *
What makes Selection Day special beyond its journalistic achievements is its sure sense of the eroticism of the locker room. Stripped of his cricketing whites and chest guard, the sportsman is at risk of exposing his heart . . . Never predictable, never simple and never consoling. * Literary Review *
[Selection Day] brings Mumbai to life . . . Adiga handles painful subjects - abuse, violence, corruption - with sensitivity and dazzling flashes of black humour. * Daily Telegraph *
Adiga's novels . . . get better and better . . . The social, economic, and environmental preoccupations readers have come to expect of him take [Selection Day] to another level of enlightenment * Sydney Morning Herald *
A well-observed, compulsively readable story of adolescence and ambition, fathers and sons and India today. * Tatler *
Aravind Adiga's enthrallingSelection Day studies, with universalizing insight, two brothers from Mumbai consecrated to cricket at psychic cost -- Paul Binding * Times Literary Supplement *
Ambitious, original and morally serious . . . a moving, unsettling and absorbing story of aspiration and its discontents in contemporary urban India . . . Much more than just a cricket book, Selection Day is one of the finest novels written about the game, combining astute judgements with accounts of individual innings marked by an unobtrusive lyricism . . . Adiga has often been compared, most notably with Last Man in Tower, to Charles Dickens, but Selection Day is reminiscent of a very different Victorian novelist: Thomas Hardy . . . there is never any doubt of its tragic resolution; yet it loses none of its emotional force . . . Selection Day is written at an angle to conventional realism; Adiga does not construct the illusion that we see this world through the eyes of his characters. We see it through the author's eyes, and what emerges most powerfully, as with Hardy, is the author's own personality: the force of his humanity and his social and political vision . . . In the quarter-century since liberalisation, urban India has seen more social and economic change and upheaval than in entire centuries. To a remarkable and depressing extent, Indian fiction in English has failed to reckon with this change. For the third book running, Adiga rises to the challenge with a novel of ambition, originality, moral seriousness and sociological insight. To use an analogy appropriate to a novel about batsmanship: where so many of his peers are content to safely nudge ones and twos, Adiga remains willing to take risks in the pursuit of fours and sixes. * The Hindu *
Enthralling . . . studies, with universalizing insight, two brothers from Mumbai consecrated to cricket at psychic cost * Times Literary Supplement *
I also enjoyed and admired Aravind Adiga's funny and touching Selection Day in which cricketing prodigies in Mumbai face googlies from both bowlers and life -- Peter Parker * Spectator *
The best novel I read this year . . . In its primal triangle of rival brothers and a maniacal father, hell-bent on success in cricket in India, Adiga grips the passions while painting an extraordinary panorama of contemporary sports, greed, celebrity, and mundanity. As a literary master, Adiga has only advanced in his art since his Booker Prize-winning The White Tiger. -- Mark Greif * Atlantic *
Supplies further proof that [Adiga's] Booker Prize . . . was no fluke. He is not merely a confident storyteller but also a thinker, a skeptic, a wily entertainer, a thorn in the side of orthodoxy and cant . . . What this novel offers is the sound of a serious and nervy writer working at near the top of his form. Like a star cricket batter, Mr. Adiga stands and delivers, as if for days. -- Dwight Garner * New York Times *
Adiga's wit and raw sympathy will carry uninitiated readers beyond their ignorance of cricket . . . Adiga's paragraphs bounce along like a ball hit hard down a dirt street . . . Adiga's voice is so exuberant, his plotting so jaunty, that the sadness of this story feels as though it is accumulating just outside our peripheral vision -- Ron Charles * Washington Post *
A master class in integrating character . . . Peppered with dashes of humor, this dark and unflinching story is an unqualified triumph. * Booklist (starred review) *

Aravind Adiga was born in 1974 in Madras (now Chennai) and grew up in Mangalore in the south of India. He was educated at Columbia University in New York and Magdalen College, Oxford. His articles have appeared in publications including the New Yorker, the Sunday Times, the Financial Times, and the Times of India. His first novel, The White Tiger, won the Man Booker Prize for Fiction in 2008. His second novel, Last Man in Tower, was published in 2011.

'Adiga is a real writer - that is to say, someone who forges an original voice and vision' Sunday Times

'Beautifully done . . . As honest a book as it is entertaining: funny and engaging' John Burnside, The Times (Last Man In Tower)

'Adiga achieves in a dozen pages what many novels fail to do in hundreds: convincingly render individual desire, disappointment and survival . . . Between the Assassinations commands attention from beginning to end' San Francisco Chronicle

'Blazingly savage and brilliant . . . Not a single detail in this novel rings false or feels confected' Neel Mukherjee, Sunday Telegraph (The White Tiger)

GOR010409105
Selection Day: Netflix Tie-in Edition by Aravind Adiga
Aravind Adiga
Used - Like New
Paperback
Pan Macmillan
2018-12-11
352
1509886540
9781509886548
N/A
Book picture is for illustrative purposes only, actual binding, cover or edition may vary.
This is a used book - there is no escaping the fact it has been read by someone else and it will show signs of wear and previous use. Overall we expect it to be in very good condition, but if you are not entirely satisfied please get in touch with us.