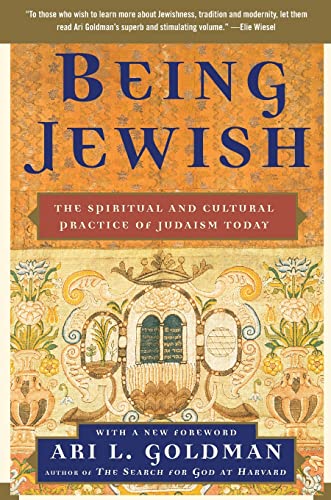 Being Jewish
by Ari L. Goldman

Used Price
$42.99
inc. GST
Free Shipping in Australia
Now available in trade paperback with a new afterword, the widely respected journalist Ari Goldman offers an eloquent discussion of the meaning and origins of the ritual moments at the heart of Judaism.
Very Good

Being Jewish by Ari L. Goldman

The book is divided into three sections, each representing a cycle of Jewish life. The first section demonstrates how Judaism responds to the natural events of life, looking at the ceremonies associated with birth, the coming-of-age, marriage, and death. The second deals with the major milestones of the Jewish calendar - holidays such as Rosh Hashanah, Yom Kippur, Hanukkah, Passover, Shavuot, Sukkot, and Purim - as well as the Sabbath, minor fast days, and holidays created to respond to the tragedy of the Holocaust and the creation of the State of Israel. The third section explores the rhythm of the Jewish day, in which time is marked with prayers and blessings

"To those who wish to learn more about Jewishness, tradition and modernity, let them read Ari Goldman's superb and stimulating volume." -- Elie Wiesel
"Ari Goldman gives us a marvelous guide to being Jewish, emphasizing the joy rather than the 'oy.' Goldman speaks to the heart as well as the mind and provides an eclectic road map through the diversity of Jewish life." -- Alan M. Dershowitz

ARI L. GOLDMAN, one of the nation's leading religion journalists, was a reporter for The New York Times for twenty years. He left the Times in 1993 to teach journalism at Columbia University, where he has trained a new generation of religion writers. Professor Goldman was educated at Yeshiva University, Columbia, and Harvard. He is the author of the bestselling memoir The Search for God at Harvard and the widely acclaimed Living a Year of Kaddish. Goldman has been a Fulbright Professor in Israel and a Skirball Fellow at Oxford University in England. He lives in New York with his wife and their three children.

GOR002103795
Being Jewish by Ari L. Goldman
Ari L. Goldman
Used - Very Good
Paperback
Simon & Schuster
2007-10-01
288
1416536027
9781416536024
N/A
Book picture is for illustrative purposes only, actual binding, cover or edition may vary.
This is a used book - there is no escaping the fact it has been read by someone else and it will show signs of wear and previous use. Overall we expect it to be in very good condition, but if you are not entirely satisfied please get in touch with us.