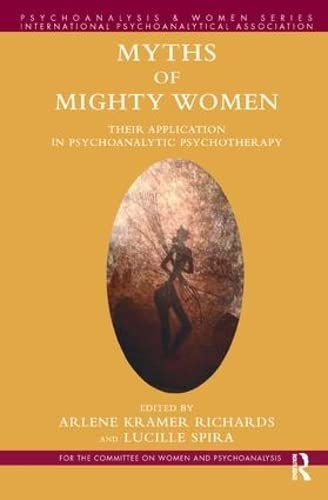 Myths of Mighty Women: Their Application in Psychoanalytic Psychotherapy by Arlene Kramer Richards

Women whose mothers were not called upon to achieve in a man's world have a difficult time seeing themselves as powerful enough to do that. Identifying with mighty women of the past and of the present culture can help them to permit themselves to achieve more than their mothers did. This book provides several such myths from ancient and modern cultures, from both Western and Eastern traditions, each of which is a standard for a particular aspect of female power and all of which can provide that power for women now. Among the aspects of women's power are Super Girl, Warrior Woman, Evil Temptress, Protective Mother and Provider. This book is useful for therapists to read themselves and/or to give to their patients when they suffer from fantasies of the bad mother who does not want to be surpassed or the weak mother who cannot protect, or the therapist who wants to keep the woman patient in a weak and needy position.

'This fascinating volume transcends the enduring myths of mighty women and their accomplishments. A group of eminent authors expand and modernise concepts of the psychoanalytic psychotherapy of women in the historical context of ancient myth. These myths are integrated with newly emerging psychosocial and therapeutic models of female ambition, power, identity, and independence. An elegant depiction of many facets of femininity, this book will reward psychotherapists in their clinical work with both female and male patients, helping both genders to better understand themselves and each other.'--Harold P. Blum, MD, FAPA, former editor of The Journal of the American Psychoanalytic Association and former Vice-President of the International Psychoanalytical Association (IPA)'Many of the stories dealt with in this volume show the confl icts faced by women that make it hard to express their strengths. I commend the authors for this absolutely extraordinary journey. I feel much stronger for having taken the time to honour the strength of these heroines and in so doing get in touch with my own and my patients' powerful feelings about being a woman.'--Carolyn Ellman, PhD, Training and Supervising Analyst at the Institute for Psychoanalytic Training and Research and co-editor of A New Freudian Synthesis: Clinical Process in the Next Generation 'The pages of this book narrate stories of female embodiment, fertility, birth, and the creative and destructive forces of maternal excess and feminine devotion, as well as tales of jealousy, revenge and cyclical regeneration among powerful heroines, priestesses and goddesses, as depicted in Western and Eastern cultural imaginings.'--Joan Raphael-Leff, Anna Freud Centre, and author of a number of books including The Dark Side of the Womb'In this stirring book we find a series of mythic narratives about female heroines in a new voice. Myths expose the complexity and wealth of the feminine universe in its paradoxical aspects. This book is recommended to all who need tools to picture the female experience but have not yet found figurative or verbal expression to do so; those who are interested in the meanders of the feminine psyche and in the possibility of giving women a voice.'--Candida Se Holovko, full member of the Brazilian Psychoanalytical Society of Sao Paulo and of the IPA, and co-chair of the Committee for Women and Psychoanalysis for Latin America'This book is committed to Freud's conviction that ancient poets anticipated the insights of psychoanalytic research. The editors take the position that the psychology of women is embodied in the stories of heroic women's lives: embedded as these are in the laws, values, ethics, gender relations, and prejudices of the worlds and times into which they are born. Virgins and whores, mothers and crones, women who sacrifi ce and women who murder - all are presented and considered, bringing to life for readers the full spectrum of feminine possibility.'--Jeffrey Stern, PhD, the Chicago Institute for Psychoanalysis, President of the Chicago Psychoanalytic Society, Associate Editor of The Annual of Psychoanalysis and Visiting Professor of Psychoanalysis at Wuhan University, China

GOR010739855
Myths of Mighty Women: Their Application in Psychoanalytic Psychotherapy by Arlene Kramer Richards
Arlene Kramer Richards
Psychoanalysis and Women Series
Used - Very Good
Paperback
Taylor & Francis Ltd
2015-06-30
272
1782203044
9781782203049
N/A
Book picture is for illustrative purposes only, actual binding, cover or edition may vary.
This is a used book - there is no escaping the fact it has been read by someone else and it will show signs of wear and previous use. Overall we expect it to be in very good condition, but if you are not entirely satisfied please get in touch with us.