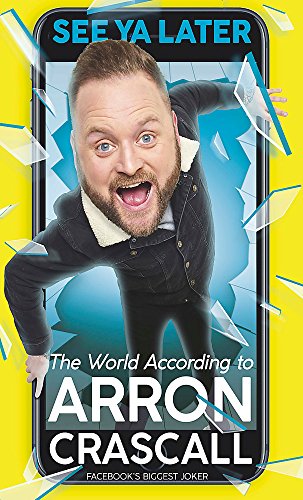 See Ya Later
by Arron Crascall

Alright guys? It's me, Arron. Or as some people call me, 'that guy with the phone, the skinny jeans and the really fat head on Facebook'.

Because there's more to life than Brexit, Bake Off and banging on about being vegan. Yes, with this book - which is my take on the world - you will learn how to survive a proper lads' holiday, become a master in the art of takeaway ordering and find out about the pitfalls of seriously inappropriate tattoos.

So do yourself a favour: turn off the news, cancel that juice cleanse, open your eyes to the brilliant, hilarious world we live in and most importantly . . . buy this book.

*Actually, don't do exactly that, that's my thing.

Arron Crascall burst onto the social-media scene back in 2014 with hugely successful compilations on Facebook of his Vine content. Since then, Arron has become a social media megastar with over 4.3 million Facebook followers tuning into his unique blend of comedy sketches along with over a million followers across Twitter, Instagram and YouTube. On Facebook alone, Arron has numerous videos reaching upwards of 30 million views and is one of the UK's most recognised online comedy faces. Currently starring in his own BBC3 comedy series, Arron has also appeared in documentary/comedy show Stupid Man, Smart Phone with Russell Kane and Drunk History alongside Stephen Mangan. Huge celebrities such as Channing Tatum, Kevin Hart, Ice Cube, Shaggy and Jamie Oliver have also appeared in Arron's videos. You can follow Arron on: Facebook: @arroncrascallpage Instagram: @arron_crascall Twitter: @arron_crascall YouTube: https://www.youtube.com/user/Arroncrascall Snapchat: https://www.snapchat.com/add/cracker0001

GOR008690381
See Ya Later: The World According to Arron Crascall by Arron Crascall
Arron Crascall
Used - Very Good
Hardback
Orion Publishing Co
2017-10-19
240
1409169367
9781409169369
N/A
Book picture is for illustrative purposes only, actual binding, cover or edition may vary.
This is a used book - there is no escaping the fact it has been read by someone else and it will show signs of wear and previous use. Overall we expect it to be in very good condition, but if you are not entirely satisfied please get in touch with us.